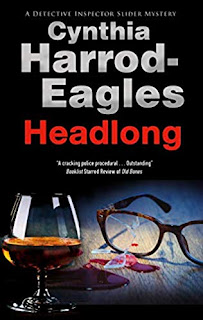 This is, according to the author’s website, the 21st in her Bill Slider series, and as enjoyable as all the other Slider titles. Like all the others it is set in and around Shepherds Bush in West London, an area which is both socially and culturally mixed and, while the main protagonist, Detective Chief Inspector Bill Slider, continues to be at the heart of the narrative, over the years some other members of his team have changed.

This time Slider is investigating the death of the well-known and popular literary agent Ed Wiseman, who has fallen fram a window of his house in Holland Park on to a wheelbarrow full of bricks which is the remains of the house next door which is in teh process of being partly demolished prior to extensive referbishment.

The most likely reason for his death is suicide although why such a successful and popular agent, well-known in the literary and publishing world, should have chosen to end his life is curious. But Slider’s boss, Detective Superintendent Porson of the splendid malapropisms and Spoonerisms, and the even more somewhat menacing Borough Commander Carpenter would like the detectives not to enquire any further. True, Wiseman was something of a Lothario but his various lady loves, even his ex-wife, forgave him because of his immense charm which enabled him to get away with behaviour that would otherwise have resulted in deep anger, at least among some discarded lovers. And the forensic evidence definitely points to death having resulted from a fall. Nonetheless Slider isn’t entirely satisfied; there are one or two things which make him think that Wiseman had not intended suicide. And then there is more detailed forensic evidence which shows that Wiseman’s death had actually resulted from several blows to the head with a blunt instrument. Meanwhile at home Slider’s wife Joanna seems to have something on her mind, something which she won’t tell Slider about.

So there does have to be a more thorough investigation of Wiseman’s death after all, and Slider needs to turn over quite a few stones while he, along with his team, Detective Sergeants Atherton of the deceptively Bertie Wooster façade and Hart, very much the local girl, and Norma Swilley, intensify their inquiries until they find the answer. And it is a measure of this writer’s talent that, despite the light-hearted tone of Slider’s relations with his colleagues, the reader is fully aware of the tragic nature of that answer. Highly recommended.
------
Reviewer: Radmila May

Cynthia Harrod-Eagles was born in Shepherd's Bush in London. She was educated at Burlington School, a girls' charity school founded in 1699, and at the University of Edinburgh and University College London, where she studied English, history and philosophy. She wrote her first novel while at university and in 1972 won the Young Writers' Award with The Waiting Game. Afterwards she had a variety of jobs in the commercial world, while writing during the evenings and weekends. The birth of the Morland Dynasty series enabled her to become a full-time writer in 1979. The series was originally intended to comprise twelve volumes, but it has proved so popular that it has now been extended to thirty-five .In 1993 she won the RNA Novel of the Year Award with Emily, the third volume of her Kirov Saga, a trilogy set in nineteenth century Russia, and she also writes the internationally acclaimed Bill Slider Mysteries. There are now twenty-one books in the series. Cynthia Harrod-Eagles still lives in London, has a husband and three children, and apart from writing her passions are music (she plays in several amateur orchestras) horses, wine, architecture and the English countryside.

Radmila May was born in the U.S. but has lived in the U.K. since she was seven apart from seven years in The Hague. She read law at university but did not go into practice. Instead she worked for many years for a firm of law publishers and still does occasional work for them including taking part in a substantial revision and updating of her late husband’s legal practitioners’ work on Criminal Evidence published late 2015. She has also contributed short stories with a distinctly criminal flavour to two of the Oxford Stories anthologies published by Oxpens Press – a third story is to be published shortly in another Oxford Stories anthology – and is now concentrating on her own writing.
Posted by Lizzie at 13:53