‘The Price of Silence’ by Nikki Copleston 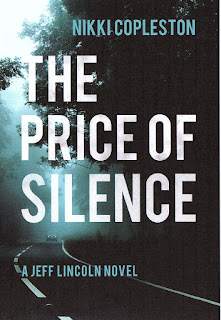 The community of Barbury, the Wiltshire market town, is deeply shocked when the body of popular local businesswoman Holly Macleod is found by a young girl in squalid public toilets near a pub on the town’s outskirts. Examination of the body establishes first of all that she was beaten about the head, and then strangled, and there is also semen on her underclothes. More shocked than anyone else is Holly’s partner Meg Spry in the employment agency that she and Holly ran together along with their assistant Sarah as well as a charity, Second Time Trust (STT), which funds training for women who are going back into work but do not have the requisite skills.

Detective Inspector Jeff Lincoln is the officer investigating the crime along with his detective colleagues Sergeant Mike Woods, Constables Pam Smyth, Dennis Breeze and Graham Dilke. Right from the beginning of the investigation there are a number of puzzles: where is Holly’s handbag? The motive was plainly not robbery, but then what was it? Her car, an elderly Volvo, has disappeared so where is it? And the car found abandoned near the toilets belongs to a London businessman, Leo Goldsmith; does he have a connection? Holly has always denied having married before she met her husband, second-hand bookseller Bruce Macleod or have had children, but on her stomach are the scars of a C-section; how come? And why does Macleod show no interest in how Holly died or whether there had been a sexual assault? Meg uncovers apparent fraudulent activity in the activities of STT: is it some sort of money-laundering exercise? Who is Samuel Faraday? Was there something going on between Holly and her accountant, Jack Avery, who seems to be more upset about Holly’s death than her husband? Meantime Lincoln has to cope with his own emotional problems: his wife left him several years ago for a lecturer at a local college, Andy Nightingale, and then died. But Nightingale has also been affected by the fraudulent activities in STT. And just how does Macleod’s research into the deceased artist Withold Bartmann and his partner Inigo Jay, names given to Lincoln by the attractive librarian Trish Whittingham, fit in? And behind everything in the Barbury hinterland is the dubious businessman Doubleday and the plans of him and others to redevelop some waste land near Barbury.

All this and many other ramifications contrived to make this story engage me until I reached the end. Another aspect which intrigued me is the setting. Barbury itself seems to be fictitious but presumably it is in the environs of the real-life Barbury Racecourse and the prehistoric Iron Age hillfort, Barbury Castle near the ancient Ridgeway trackway, one of a series of such forts which offer spectacular views across the countryside below. I wonder if it is. Recommended.
-------
Reviewer: Radmila May 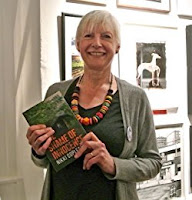 Radmila May was born in the U.S. but has lived in the U.K. since she was seven apart from seven years in The Hague. She read law at university but did not go into practice. Instead she worked for many years for a firm of law publishers and still does occasional work for them including taking part in a substantial revision and updating of her late husband’s legal practitioners’ work on Criminal Evidence published late 2015. She has also contributed short stories with a distinctly criminal flavour to two of the Oxford Stories anthologies published by Oxpens Press – a third story is to be published shortly in another Oxford Stories anthology – and is now concentrating on her own writing.
Posted by Lizzie at 17:03