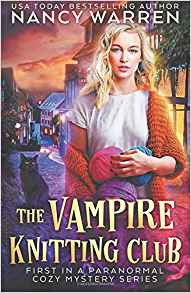 Lucy Swift decides that the best place to get over Todd the Toad is Oxford, where her grandmother has The Cardinal Woolsey knitting store and, up until now, a warm welcome from her granddaughter. This time, not so much. Agnes Bartlett isn’t at the store and the general news is very bad. Agnes died. Agnes is buried. As far as anyone knows, Lucy now owns Cardinal Woolsey; her mother is an archaeologist and Agnes knew better than to leave her a yarn store. The news gets worse, and it’s news that Lucy can’t really share with anyone, even if she had anyone in Oxford to share it with. Agnes isn’t really dead - well, she is, but she’s also undead and living under the store with a whole bunch of other vampires. The vampires knit in the store of an evening. And they can knit quickly, too. This handy bit of news actually helps Lucy keep the store going while she figures all kinds of things out.

Top on her list of questions to be answered: Who killed Agnes?  Did Agnes fire her assistant, Rosemary, and if so, why?  Should she believe the people who are persistent in their desire to buy her shop, which Agnes specifically said Lucy should keep exactly as she found it?  Who is lying to her, and why?  Where is her grandmother’s grimoire? What should she do about the emotions Rafe Crosyer (a very old vampire) and Detective Inspector Ian Chisholm (a reasonably young policeman) are arousing in her, and isn‘t it a bit soon after Todd the Toad?  All of this while she’s trying to run a yarn store, a job for which she has minimal experience and virtually no skills, at least not in terms of fibre arts. She can’t even knit, for pity’s sake.

I will say, right up front, this isn’t a mystery roiling with social issues and deep political overtones. It’s a fun way to spend a wintry afternoon, especially if hot chocolate is involved. The characters are believable and entertaining. Oxford - one can hardly go wrong with such a great setting. Fans of woo-woo mysteries can add this one to their shelf; it’s the first in a “paranormal cozy mystery series”, according to the front cover. Sit a spell and enjoy,
------
Reviewer: P.J. Coldren 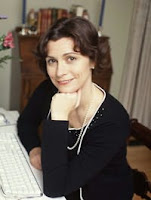 Nancy Warren is the USA Today Bestselling author of more than 70 novels. She’s originally from Vancouver, Canada, though she tends to wander and has lived in England, Italy and California at various times. Favourite moments include being the answer to a crossword puzzle clue in Canada’s National Post newspaper, being featured on the front page of the New York Times when her book Speed Dating launched Harlequin’s NASCAR series, and being nominated three times for Romance Writers of America’s RITA award. She’s an avid hiker, loves chocolate and most of all, loves to hear from readers! The best way to stay in touch is to sign up for Nancy’s newsletter at 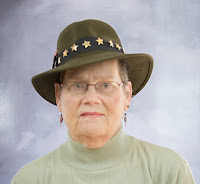 P J Coldren has been reading and reviewing mystery fiction for over a quarter of a century. She reads broadly within just about all genres and sub-genres. She was a preliminary judge for the Malice Domestic/St. Martin’s Press Best First Traditional Mystery Novel Contest for at least 25 years. She lives in Northern lower Michigan with one large cat, and 2 fairly small dogs.  She says, ‘I am totally chuffed to be the Fan Guest of Honor at Malice Domestic 2019.
Posted by Lizzie at 17:11