‘A House of Ghosts’ by W.C.Ryan 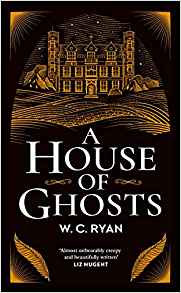 To Blackwater Abbey on an island off the Devon coast in the last months of 1917, while the apparently unending World War I is raging on, comes a disparate party the intent of which is to call up the spirits of the dead. The various members of the party have been invited by the armament’s manufacturer Lord Highmount whose riches could not safeguard the lives of his two sons, Reginald and Algernon,who  had died in the trenches. Among the party is Kate Cartwright whose brother Arthur had also been a casualty of the fighting. She is coming as the companion of Rolleston Miller-White, a staff officer in the War Office, to whom she had been, but is no longer, engaged. Why the subterfuge? Because Kate is working for the Secret Intelligence Service and C, head of SIS, has told her to. Why? Because it appears that plans for a secret weapon manufactured by Highmount Industries have got into the hands of the Imperial German Flying Corps and C wishes to know how. Possible suspects are Lord Highmount’s wife Elizabeth who is Austrian, and the two mediums, Madame Feda and Count Orlov. Kate will not be alone; with her will be Captain Robert Donovan, Irish by birth but who has also seen service with the British Army in the trenches. However, he is now to accompany Rolleston as his valet and observe what is going on. Another person of interest is the butler Vickers: although outwardly timid and unassuming he is a known pacifist and Bolshevik. Others in the party include Kate’s parents, Sir Edward and Lady Margaret Cartwright, and Lord and Lady Highmount’s daughter Evelyn. Lady Margaret hopes to establish contact with her son; Evelyn, however, seems uncaring about her brothers’ deaths and is only interested in Rolleston. And there is a Doctor Reid who has a more scientific interest in the ability to contact ghosts.

But this group along with a number of servants are not alone. There are ghosts: Kate in particular sees them everywhere, not just those who died in the carnage in Flanders but from the island’s more remote past. She knows that Orlov also sees ghosts; and one of the servants, Simms, wounded in the fighting and severely shell-shocked, is haunted by the apparitions of those who died.

And then there is a death. And the island is cut off by storms.

It takes a skilful writer to interweave the strands of classic country house murder among the upper classes, spy story and ghost tale as this accomplished writer, already praised for his Inspector Korolev series (see the Reviews page on the Mystery People website) and the moving love story of The Constant Soldier, has so emphatically done. Highly recommended.
------
Reviewer: Radmila May

William Ryan is an Irish writer living in London. He was educated at Trinity College, Dublin and the University of St Andrews and worked as a lawyer before taking up writing full-time. His first novel, The Holy Thief, was shortlisted for the Theakstons Crime Novel of the Year, The Kerry Group Irish Fiction Award, The CWA John Creasy New Blood Dagger and a Barry Award. His second novel, The Bloody Meadow, was shortlisted for the Ireland AM Irish Crime Novel of the Year. William  lives in London with his wife and son.