‘One Law for the Rest of Us’ by Peter Murphy 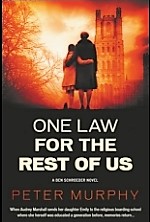 This is the sixth in this author’s legal thrillers featuring barrister Ben Schroeder set in the 1960s and 1970s. It is now 1974. Audrey Marshall has sent her daughter Emily to the same highly-reputable Anglican boarding school that she and her sister had been sent to as a child at the height of the bombing in World War II. Despite the loss of her parents and her sister’s subsequent suicide, her memories of her school days are largely happy. And although she at first found relationships with men extremely difficult she does eventually marry, and then Emily arrives. But then, after about a year, Emily begins to show signs of disturbance and admits to her mother that men have been coming to the school in the evening and touching her. One of the men Emily can identify – the school’s headmaster – but the others are all masked. This awakens dreadful memories for Audrey: much the same had happened to her but she had buried those memories. Until now when they burst upon her like a hurricane. But eventually she and her husband go to the police and a prosecution is set in train as regards not just the abuse of Emily but also those that Audrey herself now recollects. And not just the headmaster who had presided over both sets of abuses but those others whom Audrey now not only recollects but can identify as being figures now prominent in public life. And because of that media attention is certain to be intense. They consult a solicitor, Julia Cathermole, and she in turn brings in Ben and fellow-barrister Virginia Castle to advise Audrey as to how to prepare for the trial of not only the school’s headmaster but the men whom Audrey can identify as actual perpetrators.

The author’s depiction of the ensuing trial, conducted according to the rules of evidence and procedure of the time, is impressively authentic and also deeply painful, despite the detached language used to describe in forensic detail the way in which the actual offences were committed. The overall effect is nightmarish. Highly recommended.
------
Reviewer: Radmila May

Peter Murphy was born in 1946. After graduating from Cambridge University, he spent a career in the law, as an advocate and teacher, both in England and the United States. His legal work included a number of years in The Hague as defense counsel at the Yugoslavian War Crimes Tribunal. He lives with his wife, Chris, in Cambridgeshire.
http://www.petermurphyauthor.co.uk