‘Death of a Jester’ by Deb Richardson-Moore 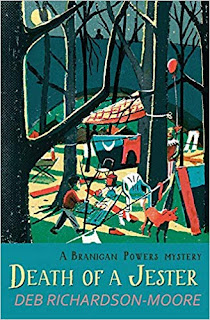 This is the third in the author’s series set in the fictitious town of Grambling in the U.S. state of Georgia featuring local reporter Branigan Powers and her lover Detective Chester Scovey. A report has come into the local paper of a clown being seen in the woods trying to lure a child into the woods. The report is not taken very seriously by either the paper or the police who have already been told, and the investigation is somewhat half-hearted. Neither is a report of a second clown also approaching a child since neither attempt was successful. Branigan is more interested in the news about her aunt who has been diagnosed with a serious medical condition and the imminent arrival of her two cousins, actress Jimmie Jean and school counsellor Isabella. Jimmie Jean lands the lead in a musical being put on by the local theatre company – Annie Get Your Gun – and Branigan is concentrating on her family. But then a child goes missing, a young boy who with his family has been living in a tent city established by a number of homeless people in the woods and the reports of beckoning clowns are taken more seriously. And there is someone else who is deeply concerned by the stories and that is the homeless Malachi who is now living in a tent city in the woods and, after his experiences as U.S. soldier in Kuwait, is suffering from PTSD particularly by his inability to rescue a young Bedouin boy in that conflict.

The missing child cannot be found and concerns for him are increasing. Meanwhile, Branigan is unsettled to hear that Jimmie Jean’s marriage (to Branigan’s own first love) Isabella has not only been stalked by someone but that someone has followed her to Grambling and landed the male lead in the musical. And, because the person who abducted the missing child is pretty certainly the person dressed as a clown who had been trying to lure children, attention switches to the theatre company quite a few of whom have aspects of their private lives that they would prefer not to be known about. And then a body dressed in clown clothes is discovered.

This is a lively, well-written story in the cosy genre with a large cast of likeable characters and a strong portrayal of a typical American small town in the South where the various churches – Methodist, Baptist, Presbyterian – play a leading role in the community, supplying effective social support to those in need for whom official care seems either not to exist or to be inadequate. I was surprised that the response to the first reports of beckoning clown were not taken more seriously but perhaps the U.S. has not yet uncovered its very own Jimmy Savile.
------
Reviewer: Radmila May

Deb Richardson-Moore was a reporter for "The Greenville (SC) News," for 27 years, winning three national writing awards and routine recognition from the South Carolina Press Association. She then took over the religion beat at "The News" and enrolled in a nearby seminary to learn more about it. Her life was never the same. She left the newspaper and earned a Master of Divinity degree. Because jobs for clergywomen were scarce in her own Baptist denomination, she accepted a job as pastor of the non-denominational Triune Mercy Center, a crumbling, inner-city mission church to the homeless.