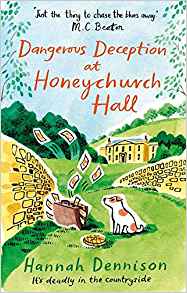 As expected, the latest in Dennison’s cosy, country mysteries series, is a delight from start to finish. Kat Stanford is an antique dealer, she has had her own television show so is well known, and respected. She is back in her own town and life for her is going well. Not only with work, but she has a few admirers, one (Piers), with whom she shares a mutual attraction. But then things take a downward turn.  A large load of rubbish is found, having been fly-tipped in the beautiful English village. There is evidence that Kat is the culprit, as Kat’s pink box containing doughnuts, is found among the litter. (Kat is known to like doughnuts). News of this offence, for which Kate is innocent, reaches the National Press, threatening her reputation and career.

Then in walks the beautiful, stylish and gorgeous, Cassandra Borden-Forbes, also an antique dealer, and with her eyes on Piers. Things now go from bad to worse when there is a mysterious death in the village and evidence points to Kat being behind it. She was the last person to be seen visiting the deceased.

Her luck and happiness nose-dive even further when another catastrophic death is uncovered. Kat now knows it is down to her to find out if a murderer is at large, one with a grudge against her? In that case could she be the next victim?

Dennison plots extremely well, but her strength and page-turning quality lies in her talent to draw highly colourful, but believable characters, as well as the detail of the buildings and the scenic countryside in the village where the story takes place.  The local PC, Shawn, is rotund and blushes when he speaks to Kat. Kat’s mother lives in an antique house needing lots of renovations. She keeps her cash in a box in the attic and refuses to use a mobile phone. She employs a Romany horse man to help in her stables, a man who has spent time in and out of prison, but the mother will hear not a word against him. Furthermore, the mother has a secret sweetheart, and has kept his identity secret.

I just love the complete frivolity of escapism in Dennison’s writing, however the plot is tight and kept me guessing.

Perfect for fans of MC Beaton, or cosy-crime, or simply if you want to bury your nose in another world and escape Winter.
------
Reviewer: Linda Regan
www.Lindareganonline.co.uk 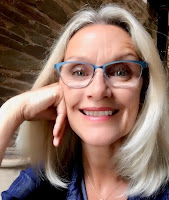 Hannah Dennison writes The Vicky Hill Mysteries and the Honeychurch Hall Mysteries (Constable Crime/Little Brown), both set in the wilds of the Devonshire countryside. British born, Hannah has been an obituary reporter, antique dealer, private jet flight attendant and Hollywood story analyst. Hannah has served on numerous judging committees for Mystery Writers of America and is currently serving on the MWA Board. She is a passionate supporter of the Society for the Protection of Ancient Buildings and the National Trust. She enjoys all country pursuits, movies, theater and seriously good chocolate.

Linda Regan is the author of six police procedural crime novels. She is also an actress. She holds a Masters degree in critical writing and journalism, and writes a regular column, including book reviews, for three magazines. She also presents the book-club spot on BBC Radio Kent. She is an avid reader and welcomes the chance to read new writers.
To read a review of Linda's most recent book
Sisterhoods
click on the title.
www.lindareganonline.co.uk
Posted by Lizzie at 14:27