‘The Defenceless’ by Kati Hiekkapelto 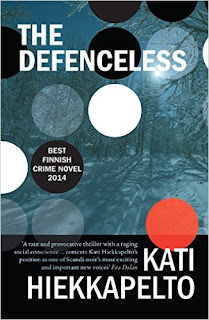 Sammy, a Pakistani Christian whose asylum application has been turned down, is living on the streets in the cold of a Finnish spring. Drugs are the only thing that make his life bearable; but when an old man comes to complain about the noise in his dealer’s flat, his life suddenly becomes even worse.

This Finnish PP takes us straight into the life of a terrified immigrant. The cop investigating the old man’s death is also from elsewhere: Anna Fekete is Hungarian, although she grew up in Finland, and her sense of being pulled by two cultures is vividly described, particularly in her emotional life and memories of what isn’t really home any more. Her partner, Esko, is harder to sympathise with: alcoholic, sexist and racist (while it’s certainly true that in their home country is a good place to help refugees, it’s hard to believe anyone who behaves as he does would really consider becoming a security guard at an overseas refugee camp). While Anna is investigating the old man’s death, Esko is tracking a motorbike gang which is creating a turf war for drug-dealing. The plot is neatly worked-out, with a surprise twist at the end, and the action moves along quickly. The description gives a real feel of a Finnish srping, with the snow slowly melting, and the first birdsong, and the difficulties experienced by refugees, and the uncaring nature of the asylum system, are brought out vividly.

A fast-moving, readable PP which makes a central issue in modern life come alive. It reads well as a stand-alone, but is the second in the series – the first is The Hummingbird.
------
Reviewer: Marsali Taylor

Kati Hiekkapelto was born in 1970 in Oulu, Finland. She is a bestselling, award-winning author, punk singer, performance artist and, formerly, special-needs teacher. She lives on an old farm on the island of Hailuoto in Northern Finland (which has been in her family for hundreds of years) with her children and sizable menagerie. Here she is currently setting up an asylum for artists in danger. Hiekkapelto has taught immigrants and lived in the Hungarian region of Serbia, which inspired her to write her highly regarded debut crime novel, The Hummingbird. 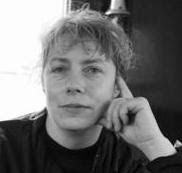