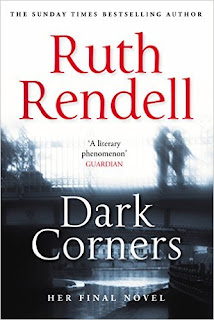 This is the last novel by the incomparable Ruth Rendell, published after her death in 2015. To my mind she was the best of the post-war British crime writers. Although she was best-known for her Wexford novels, particularly after they were televised, she also wrote a number of ‘one-offs’ as well as several under the name of Barbara Vine.

In Dark Corners the protagonist, Carl Martin, has two lucky strikes. One is that when his father, to whom Carl was not very close, dies, he leaves his house in Maida Vale (London), where his father had accumulated a good deal of junk including a store of various proprietary medicines, to Carl. And Carl’s first novel is published. But neither brings him the good fortune he had hoped for. His earnings from his novel are not enough to live on and he is finding writing a second novel difficult. And although his father’s house is big enough to allow him to let the top floor that turns out to be his undoing. His tenant is Dermot McKinnon and when Carl asks only that Dermot pay cash monthly Dermot is agreeable and for a short time the arrangement works well. But then Dermot discovers that Carl had sold some weight-loss pills from his father’s store to his friend, the actress Stacey Warren. Unknown to either Carl or Stacey, the pills can be lethal if too many are taken and Stacey does indeed die. Although Carl has done nothing illegal he is terrified that his part in her death will be disclosed. This is where Dermot, like a shark scenting blood, moves in for Carl’s destruction. He ceases to pay rent. He gradually takes over not just the house and garden but Carl’s life. He moves in his girl-friend, the pudding-like Sybil Soames, without so much as a ‘by-your-leave’. All this is done, not by violence or the threat of violence, but by pure malignity of personality. Carl is pitiably weak and malleable and lacks the strength of character to stand up to Dermot however much Carl’s live-in girlfriend, Nicola Townsend, urges him to do so. But the situation cannot go on like this. Nor does it.

In this novel, Ruth Rendell has portrayed a really convincing study of how a psychopath may search out a suitably vulnerable victim, not necessarily to destroy him physically, but to feed off him and ultimately destroy him psychologically.  It occurred to me while I was reading this that some would-be writers of the currently fashionable ‘psychological suspense’ novel, would benefit from a study of this book: what is it about the victim that initially attracts the perpetrator? And what is about the perpetrator that enables him to dominate his victim?

With his cold, scheming malevolence, Dermot is a truly menacing character, and the possible reference in the title to the plotting, manipulative ‘Duke of dark corners’ in Shakespeare’s Measure for Measure is telling. Highly recommended.
------
Reviewer: Radmila May 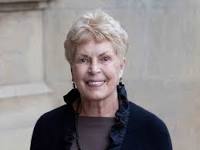 Ruth Rendell was born Ruth Barbara Grasemann on Feb. 17, 1930, in South Woodford, East London, to Arthur Grasemann and his Swedish-Danish wife, Ebba, according to a 2013 article in the Independent newspaper. Educated at the County High School for Girls, in Loughton, Essex, east of London, Rendell worked as a reporter on a local newspaper. She met her husband, Don Rendell, when she was 20 and the couple had a son in 1953. As a young mother, she began to write short stories, all of which remained unpublished until she made her name as a novelist. Rendell tried her hand at several genres, eventually submitting a light romance to one publisher who asked whether she had anything else to show them. She did, and after extensive rewrites, From Doon With Death, the first Inspector Wexford novel, was published in 1964. Wexford is, she told the Telegraph newspaper in a 2011 interview, an "ordinary" man.
She won the Grand Master Award and three Edgar Awards from the Mystery Writers of America as well as four Gold Daggers from the U.K.'s Crime Writers' Association. Rendell received a peerage from Queen Elizabeth II in 1997, becoming Baroness Rendell of Babergh in the House of Lords.
She and her husband divorced in 1975, but remarried two years later. Don Rendell died in 1999. They had a son, Simon. Ruth died in London 2 May 2015.