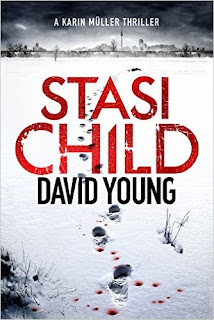 This novel is set in East Germany (the DDR) in 1974 at a time when that country and the whole of Eastern Europe was controlled by the Communist Party (in effect, by the then USSR). Every aspect of life was dominated by the Party and dissent was forcefully repressed. Life in the DDR was presented as being immeasurably superior to life in Western Europe, particularly West Berlin. Amazingly, most East Germans were apparently prepared to accept this whatever the evidence to the contrary. So when the body of a young girl with a mutilated face is found in a snowy cemetery bordering on the ‘Anti-Fascist Protection Barrier’ (the Berlin Wall) it is essential that the authorities identify it as being a West German escaping from the evil and corrupt influences of the West. But Oberleutnant Karin Muller of the People’s  Police (the Vopo) is not happy about this; although the girl’s shoes are on the right feet the footprints tell a different story. And, more ominously, tyre tracks appear to be from a Volvo limousine, the chosen vehicle of the higher echelons of the East German political establishment. So it is not surprising that in addition to the investigation of the murder by the CID Division of the People’s Police, Klaus Jager, an officer from the Ministry of State Security (the Stasi), is taking an interest in the murder; what is surprising that he does not take full control of the case to ensure that no evidence awkward for the authorities comes to light. Is he planning that Muller and her colleagues take the blame for finding evidence that could cause trouble for him? Or has he some deeper, more widely political motive? At the same time, Muller’s personal life is causing her problems; her partner Gottfried suspects her of a sexual relationship with her married colleague Werner Tilsner; in fact, the sexual relationship consists of a drunken one-night stand but it is enough to threaten the relationship with Gottfried. The investigative trail as to the young girl’s identity and the cause of her death leads to a Jugendwerkhof where there are a number of young girls who have been sent there for ‘re-education’. The depiction of life in the Jugendwerkhof is particularly powerful; those places were in fact scenes of great brutality which used the unfortunate children confined in them as slave labour.

This book is of especial interest for its depiction of life in East Germany, where paranoia and suspicion ruled, before the collapse of Communism in Eastern Europe and eventually in Russia itself and the detachment of those countries which had formed the USSR. It seems extraordinary that so many people were convinced, not only of the rightness of their cause, but that their living conditions were so superior.
------
Reviewer: Radmila May