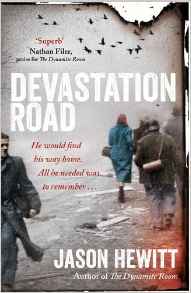 A young man wakes and finds he is lying in a field. He does not know how he came to be there, where he is, or even who he is. He is in pain and is wearing clothes that are not his. At first he thinks he is back home, but the sight of a mangled train and bodies mixed with debris convinces him that wherever he is it is not pre-World War II England. He takes a pistol from a soldier’s corpse and plods on, aware that he is desperately hungry. Then as he comes to a potholed road, he sees that there are other travellers on the road, hundreds, thousands, hundreds of thousands, all trudging westwards but he avoids them, fearing danger. He remembers his name, Owen, the names of other people although he does not know why he knows the names. Other memories swim in and out of his consciousness but so confused that they are meaningless. In a wood he encounters a teenage boy who speaks to him in a language he does not understand. It is in fact, April 1945 and Nazi Germany has been defeated although Hitler is not yet dead. Somehow Owen has been in Eastern Europe – why he has no idea – and is now one of the millions of many nationalities fleeing before the remorseless advance of the Soviet armies and the ensuing chaos. The boy is Czech, his name is Janek, and the two continue together although neither can understand anything the other says. Janek is searching for his brother, Owen simply wants to remember who he is and to move on, but although more memories come, in particular of his own brother Max, they are as confused as the earlier ones. They encounter a young woman who is carrying an infant and offering it to passers-by; then she abandons the infant and Owen picks it up and, unwilling to leave it to die, carries it. After a while she comes back and the three, plus the baby, continue the journey; she says that she is Polish and her name is Irena but she does speak German which Owen also speaks so he can communicate at least with her. The relationships between the three are difficult but they are bound to each other by their common overwhelming desire to reach Western Europe and some sort of safety.
This is an excellent novel. The author’s ability to depict the chaos that followed the end of the most savage war in history is compelling and the way in which Owen’s slowly returning memory is depicted is highly convincing. There may not have been a crime in the sense in which it is usually taken in crime fiction, but when it comes to the crimes committed in World War II, where can one start? And there are resonances for today. Although the responses of organisations such as UNHCCR were initially inadequate the victorious Allies did eventually get matters sorted out, if not entirely satisfactorily, at least better than the response to the present-day migrant crisis.
I hope I can obtain a copy of his earlier book, The Dynamite Room; if it is anything like as good this one, it will be a powerful experience. Highly recommended.
------
Reviewer: Radmila May

Jason Hewitt was born in Oxford and lives in London. He has a Bachelor of Arts degree in History and English and an MA in Creative Writing from Bath Spa University. After completing his degree he spent a number of years working in a bookshop before eventually succumbing to the publishing industry and moving to London.
He is also a playwright and actor. His latest play, Claustrophobia, premiered at Edinburgh Fringe in August 2014 and was previewed at the St James Theatre, London. As an actor he has performed major roles in a number of plays in London including Pericles, A Christmas Carol, The Last Days of Judas Iscariot, The Merchant of Venice and King Lear.  Jason is currently writer-in-residence at Abingdon School, Oxfordshire, and is also learning to speak Czech.