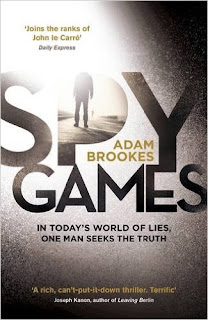 Philip Mangan, a journalist, has been in Ethiopia for about a year writing the occasional article and lying low following an abrupt departure from Beijing where he has been identified as a British spy.  He is caught in a terrorist bombing and files reports on the incident and the events of the following days – and then he is contacted by a Chinese army officer, a colonel,  who offers information on the internal power structures of the Chinese and gradually  reveals his own plans for re-organising them.  Meanwhile, in the USA, Hong Kong and the UK things are happening and Mangan’s knowledge makes him once more of interest to MI6.  Characters from the first of the series, Night Heron, re-appear and Mangan is once more working with/for MI6 agent, Trish Patterson and her boss Valentine Hoppo.  As the various factions in MI6 circle one another warily, Mangan becomes more and more  involved with the Chinese colonel and less and less in control of his own fate.

The individual strands of the story are developed in the early part of the book, as a series of apparently unconnected events start to indicate that something big is happening.  Mangan’s relationship with Patterson becomes more complicated and the final fast-moving events of the book leave him many miles from Ethiopia, re-assessing his future.

This is an up-to-the minute story, focusing on the increasing economic ascendancy of China, its activities in Africa and the potential fissures in its arcane internal structures.  The key characters, as befits a spy story, are all individually devious, never wholly likeable, but always fascinating.  Fans of Night Heron will want to read this and anyone interested in the genre generally will find something of interest in the twists and bluffs of an exciting story.
------
Reviewer:  Jo Hesslewood
Other books by the author:  Night Heron, first in the Philip Mangan series

Adam Brookes has been a foreign correspondent for many years, reporting for the BBC from China, Indonesia, and the United States. Assignments also took him to Afganistan, Iraq, Mongolia, North Korea, and numerous other countries around the globe.