‘Falling in Love’ by Donna Leon 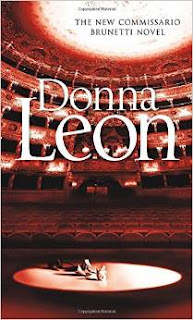 In this, the 23rd Donna Leon novel featuring Commissario Brunetti of the Venice police, we meet again the fabulous soprano Flavia Petrelli whom we met in the first Brunetti novel, Death at La Fenice.  Now, after many years and a number of husbands and lovers (of both sexes) Flavia whose voice has achieved full maturity has returned to the opera house La Fenice to sing the lead in Puccini’s Tosca. She is quite rightly applauded by all for the strength and passion of her performance. Her fans are numerous. But there seems to be one fan whose admiration amounts to obsession: Flavia is being bombarded by bouquets of yellow roses, not just in Venice on stage but in her dressing room and even in her flat. Nor is it only in Venice; there have been similar episodes in London and Paris. Flavia is as strong and independent as Floria Tosca herself but this anonymous pursuit amounts, she feels, to stalking and stalkers, she knows, can be dangerous. She seeks advice from Brunetti but he is not minded to take Flavia’s fears seriously until a young woman, also a singer, whom Flavia knows slightly, is pushed down some steps and seriously injured. Brunetti suspects there is a link but it is difficult to establish although in the end he does do so but by this time Flavia’s own life is in danger. Once again he has had to rely on Signorina Elettra’s internet skills and on the co-operation of his police colleagues, while his boss Vice-Quaestore Patta does his best to obstruct him.

It’s always a pleasure to read a Brunetti novel; doubly so in this case because the first opera I ever saw was Tosca and I was utterly blown away by the music and the drama. And Brunetti’s domestic life is always a relief to come to after all those police procedurals in which the investigating officer is a lone misery beset by relationship and alcohol problems. Apparently the Brunetti novels have been produced for German TV; maybe one day they could be bought for the BBC4 Saturday night slot.
------
Reviewer: Radmila May

Radmila May was born in the US but has lived in the UK ever since apart from seven years in The Hague. She read law at university but did not go into practice. Instead she worked for many years for a firm of law publishers and has been working for them off and on ever since. For the last few years she has been one of three editors working on a new edition of a practitioners' text book on Criminal Evidence by
Posted by Lizzie at 17:06