‘Dead in the Water’ by Ann Granger 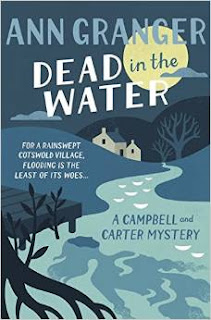 Dead in the Water is Ann Granger’s fifth novel in her series featuring Superintendent Ian Carter and Inspector Jess Campbell. It begins with the pre-Christmas floods in the Cotswold village of Weston St Ambrose. A local vet, Mike Lacey, is the first to see the body of a young girl floating down the river but by the time the police come it has disappeared. It finally comes to rest at Glebe House which belongs to fantasy novelist Neil Stewart and his wife Beth. Neil also chairs a local writers’ group and also runs creative writing courses at a local college. There is nothing to identify the body but Neil thinks it may be that of a waitress at a local gastro-pub where he and some of the creative writing group recently had a meal. The pub manager identifies her as Courtney Higson, daughter of local hard man Teddy Higson. He is currently in jail so could not be responsible for his daughter’s death; in any case he adored his ‘little princess.’ Carter sympathises with Higson: he loves his little daughter Millie dearly but with relations between him and his ex-wife and her new husband poor, keeping as much contact with Millie as he would like is difficult particularly with all the demands on his time arising from the nature of his work. And both Carter and Jess are desperately sorry for Courtney, too young to have her life taken from her so brutally. But there are some strange things about Courtney’s lifestyle; among the cheap showy clothes and tatty ‘bling’ are items of expensive jewellery and in the garage of the flat in the run-down council estate a new car. Another pub waitress states that Courtney had a mystery lover, an older man. Who was it? And could he be responsible for her death? Or someone else altogether? Is there a connection with the writers’group? Teddy Higson’s early release from prison on compassionate grounds, vowing to find his daughter’s killer and exact vengeance, is a further complication.

Dead in the Water is an excellent addition to Ann Granger’s lengthy list of previously published novels in four series (listed in the review of Bricks and Mortality on the Mystery People website: www.mysterypeople.co.uk/reviews). The characters, particularly the writing group members, are amusingly yet sympathetically drawn. I especially like the way the narrative point of view is not confined to Carter and Jess but moves between a number of characters thus avoiding exclusive dependence on one or two investigators which in some novels can give a claustrophobic effect. The suspense element, with Teddy Higson on the warpath, is given added impetus by the remorselessly rising floodwaters. Warmly recommended.
------
Reviewer: Radmila May 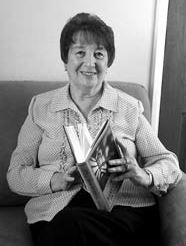 Ann Granger has worked in British embassies around the world. She met her husband, who was also working for the British Embassy, in Prague, and together they received postings to places as far apart as Munich and Lusaka. She is the author of the Mitchell and Markby Mysteries and the Lizzie Martin mystery series. She lives  in Bicester, near Oxford.