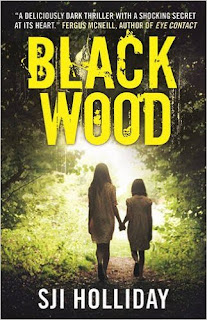 Claire and Jo are now adults but adults who have never come to terms with what happened to them in Black Wood when they were children.  The incident left Claire paralysed  and with no memory of what happened.Twenty three years on Jo is said to be luckier one she holds down a job in a bookshop run by her friend Craig, who is fortunately a  friend who tolerates Jo’s somewhat flaky behaviour where regular work is concerned.


Jo has so many unresolved issues she is basically a mess. When she spots a familiar face in the bookshop it throws up painful memories and Jo is determined to get revenge for what happened to her and Claire, but reporting the sighting brings disbelief, and so Jo decides to investigate herself.


Meanwhile,  Sergeant Davie Gray is investigating a balaclava-clad man who is attacking women on a disused railway. Could there be a connection between the man Jo is certain is her attacker and the balaclava-clad man?

The whole feel of this book is creepy and unsettling, the small community riddled with past secrets that no one wants to re-surface, but which must come to light if Jo is ever to get justice.

Fast paced with deeply flawed characters, this is an amazing psychological mystery from a new writer.
------
Reviewer: Lizzie Hayes