‘Wallace of the Secret Service’ by Alexander Wilson 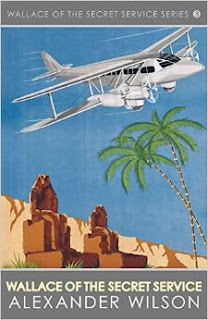 This is the third in a series of 8 books (originally published in the 1920s and 30s) featuring Sir Leonard Wallace, Chief of the Intelligence Department.  The ten short stories follow his journeys around Europe, Egypt and India, defending the interests of the country he loves.  The steely-eyed, one-armed hero displays his abilities as a linguist and master of disguise, as well as his deep knowledge of world politics and economics.  In Russia he meets Lenin and (briefly) Trotsky and in India, encounters Ghandi.  The writer’s own background and the territory covered means that there is some interesting period detail and comment, including a pithy paragraph on Afghanistan.

The modern reader perhaps sees a Boys’ Own character with dashes of James Bond (spot the nifty tracking device), Simon Templar and Paul Temple, among others.  Sir Leonard’s devoted subordinates follow him into the greatest danger, knowing that his keen intelligence and courage will be too much for their devious opponents.  They travel in planes and boats and trains, as well as cars, and don’t like to miss a meal.  Wives feature in a couple of adventures and, fortunately for Sir Leonard and his deputy, Major Brien, are made of stern stuff and have forgiving natures.

The prose style is of its time, but moves at a fair pace and there is much that is entertaining and interesting in travelling with Sir Leonard and his brave associates.
------
Reviewer:  Jo Hesslewood
Other books by the author:  The Mystery of Tunnel 51, The Devil’s Cocktail