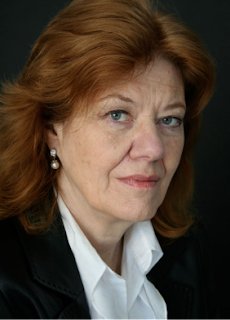 Living car-less in car-crazy Los Angeles is a challenge few Southern Californians would ever consider confronting, despite constantly clogged streets and highways. Living car-less here takes guts, patience, fortitude, great determination and a blithe confidence that things will work out.  Anne Perry has all of these attributes and knows she will always get where she needs to go. She has no qualms about taking public transportation if necessary although bus routes barely exist in some neighborhoods, and she appears to relish the freedom from worrying about finding a rare parking spot, and the potential stress of bashing into a Hollywood mogul’s Lamborghini.

One of the most popular and prolific authors of historical crime novels that are enjoyed worldwide, Perry is in great demand by fans and writers. Last week, when we met, she was back in Los Angeles after flying off to author-signing and speaking trips in Utah and Arizona, both within a three-day period and a day before the start of the June 6-7 California Crime Writers Conference, at which she was a keynote speaker.

Her stamina is remarkable although she has a deep fear of being ill and embarrassed in transit. Once, feeling faint, she allowed an airport to provide a wheelchair after flight delays and a ten-hour car drive, but her eagerness and generosity to share what she calls her “nuggets” about writing at conventions and conferences knows no bounds. Her DVDs on writing for beginners are big sellers.

Perry’s West Hollywood apartment, on a quiet residential side street, is within walking distance of shops, and friends pick her up for lunch or dinner. One of her frequent and favorite pastimes since moving to the area for several months each year is to have a meal and intelligent discussions with the circle of Angelenos and visitors she has built up. Many are from other countries, and the conversations are far-ranging.

“I am very lucky in my friends here”, she said. “They are stimulating, intellectual, and from several different cultures. As for not having a car, I haven’t felt it necessary. I am either traveling to and from an airport, or I am home writing, whether I am in Scotland or America”, she said.

Perry is not completely without wheels. In Scotland her Jaguar blew up earlier this year but she tools around the tiny village she inhabits – 450 residents – in her second-hand Volvo.

For the Los Angeles conference she was ferried back and forth to the host hotel by fellow authors, including yours truly, who were among the conference organizers.  The hotel was half an hour or so from her home (we count distances in time rather than miles) but when we arrived the lobby was jammed with hundreds of attendees. The
coffee shop was as equally noisy and packed, so we high-tailed it up to my guest room. She happily stretched out on the spare bed while we chatted, then decided she’d be more comfortable sitting on the floor.

Talk ran the gamut, from her admiration for the Vatican’s current pope to quoting a Tweet she’d received: “You made me believe that I can rebuild my life”. The sentiment was the most beautiful she’d ever been sent, Perry said, adding, “Knowing I have touched someone’s life gives me great joy. I find that Americans feel freer to express themselves, unlike in Europe. Fans here are so warm and kinder than I find elsewhere. They express themselves openly, are very perceptive, and write me the best letters”.

Opinionated about politics, she follows world events closely and believes that, after mankind sleep-walked into World War II, World War III will begin because of too much political correctness. The plots of Perry’s Christmas stories and books reflect her faith and strong views of moral issues including personal responsibility and redemption. She is particularly annoyed with “good men who do nothing”.

If her preference is for a slower means of transportation than a Ferrari, she more than makes up for it by writing her three books a year in longhand at lightning speed, faster than she can type, and  creating two chapters a week.  Short stories take a mere seven days. In Scotland Perry had a secretary to transcribe her pages onto a computer but, deciding to move permanently to the States, she’s ready to dispense with human assistance and employ mechanical means instead. Thus, The Dragon, a speech recognition software program, is about to enter her life.

But the prolific author won’t abandon her millions of fans in Spain, Germany, the UK and other countries where her works are translated and sell by the boatload. She travels constantly to meet her readers. A couple of days after the Los Angeles conference she’d be on her way to France for a literary festival. Perry admires the book covers her French publisher creates as “very, very clever”, and one of her favorite trips is to the Paris Book Fair. She’s also on the go during the year to accept awards on both sides of the Atlantic. With 26 million books in print and as the recipient of just about every literary prize for her crime novels, one wonders if her passion will ever wane and the answer is Never! Her writing is as much a part of her as breathing.

Talking about her William Monk detective series, begun after her highly successful Thomas and Charlotte Pitt series, Perry finds the Victorian era so ebullient, with such dramatic contrast between rich and poor, that she is never at a loss for characters, plot, and setting. Her immaculate research provides readers not only with fascinating lessons in history but the human condition in the 1800s, much of it terrifying for poverty-stricken women.

“It was the period when England introduced the industrial age, ruled an empire, and when London was the first City of the World. A heady time. While writing it, though, I had to be extremely careful of anachronisms regarding freedoms and privileges. It became of interest to me that some values are eternal, whatever the era”.

A day before the Los Angeles conference Perry sent off a novel to her publisher that will be out next year. She has half-finished a book set in 1485 Saragossa, Spain, and is eager to start working on the next three she has planned. Not all of Perry’s writings are fiction. She adds newsy comments to her web site, www.anneperry.co.uk, posts frequently on her blog with breezy Letters from the Scottish Highlands and offers snappy totes readers can buy to hold her books, all the while contemplating murder. Her favorite cause of death? “Strangulation, with no thrashing around”.

Anne Perry writes four series,  two set in the Victoria era, the first featuring Inspector William Monk, in which there are 21 books.  The second featuring Inspector Thomas Pitt in which there are 30 books.  There are 5 books in the WW1 Series and she has written 13 Christmas Novellas.  For a full list of her books and a synopsis of each please visit her web site:
www.anneperry.co.uk

Jill Amadio is an author, biographer, ghostwriter, and journalist. Her new crime series is set in California where her amateur sleuth is a grumpy Cornishwoman. Jill was a reporter in the UK, Spain, Colombia, and
Thailand.
http://www.jillamadio.com