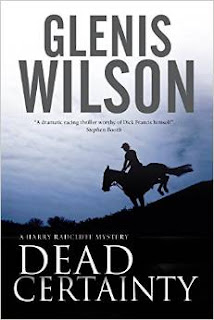 When Harry Radcliffe is injured during a race, it is uncertain whether he will be able to race again. Meanwhile, he needs to earn a living. As along with being a jockey Harry also writes a weekly newspaper column on the vagaries of horse racing, his friend and boss Mike Grantly suggests he pursue this as an alternative career until the outcome of the injury he sustained during the fall, determines whether or not he can get back in the saddle.

Initially he is not too keen but eventually he agrees to ghost-write the autobiography of retiring racehorse trainer Elspeth Maudsley. Soon he is immersed in research of her family and career.  But not everyone is happy about Elspeth’s autobiography, not least members of her own family.

Matters take a serious turn when Harry is involved in an accident that is clearly an attempt on his life. Further incidents follow and eventually murder results. Someone doesn’t want the book written and will, it seems go to any length to achieve that. Convinced that the answer must lie in Elspeth’s past, Harry continues his research into her family history.

While Harry pursues Elspeths past Harry discovers that there are secrets in his own family history.   People and situations he has accepted all his life now come into question, and the truth may rock his world.  With his future in racing uncertain, looking over his shoulder for an unknown assassin, Harry takes solace from his estranged wife being to a degree back in his life but has that any future?

This is one of those books that grabs you from the first page and never let’s go.  Very much in the Dick Francis mode – the good guys are really decent chaps and the bad guys are very bad indeed.  For a fast paced action packed read this is for you. Highly recommended.
------
Reviewer: Lizzie Hayes

Glenis Wilson was born in Radcliffe-on-Trent, Nottinghamhire. She was always a scribbler from childhood. She has been a member of Nottingham Writers' Club for 35 years, and is also a member of the Romantic Novelists' Association, the Crime Writers' Association and Mystery People group.  Glenis has eight published novels.