‘The Fire Man’ by Iain Adams 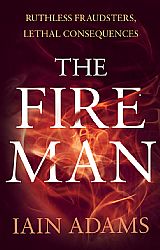 Andrew McRae has a promising career in front of him.  He manages the Birmingham branch of Fairclough and Partners, a small but growing partnership of loss adjusters negotiating the settlement of complex insurance claims.  The unexpected opportunity to do work for one of the largest general insurance companies is a fantastic opening for him and his colleagues.  However, it is not a straightforward inquiry and his investigations uncover a possible fraud involving millions of pounds.  His attempts to bring this to light get him sacked.  As he struggles to rebuild his career, he continues to think about the case and this obsession ultimately takes him in unexpected and dangerous directions.

The author is writing about an industry he knows well; the complicated operations of the insurance industry are explained and the potential for major fraud is clear.  Characters are well-drawn, the descriptions of dingy factories are familiar and the niggles of office work ring true.  The disconnected events of everyday life add to the tensions and uncertainties of this story, which keeps the reader interested and involved to the final page.
------
Reviewer:  Jo Hesslewood

Iain Adams is a qualified insurance adjuster, with decades of experience in the field of claims investigation. Apart from major frauds involving fire and floods, Adams has personally investigated and negotiated terrorism, products liability and catastrophe claims on an international basis.