‘The Lost Treasures of R&B by Nelson George 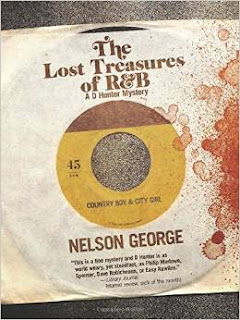 This is the third in the D Hunter series about the professional bodyguard.  D is protecting the rapper Asya Roc at an underground fight club involving ‘distaff warriors’.  The rapper has arranged to buy illegal guns here and the courier turns out to be Ice, someone D knows.  There is an attempted robbery - Ice is wounded, D gets Roc to safety, but is then caught up in a chase and shootout involving a corrupt policeman.

Against the backdrop of a Brooklyn much changed from his childhood home, and a musical soundtrack of hip hop and R&B, D tries to sort out the real story behind the shooting.  While this is going on, he gets a welcome paying job when he is asked to find a copy of the rarest soul music single ever recorded.  He also makes a visit to the UK which is full of incident, and later draws on the experience, refering to ‘one of them pale towns in England’!

D makes and loses friends as the story unfolds.  The writing is pacey and moves the action along effectively.  The R&B references may well bring back memories of the 1960s for readers of a certain age.  The descriptions of people and places work well and the vocabulary conveys a rather exotic sense of the edgy and dangerous world in which D lives.
------
Reviewer:  Jo Hesslewood
Other books by the author: The D Hunter series:  The Accidental Hunter and The Plot Against Hip Hop.

Nelson George is an author/filmmaker who specializes in documenting and celebrating African-American culture. As an author he's written several classic black music histories, including Where Did Our Love Go?: The Rise and Fall of the Motown Sound, The Death of Rhythm & Blues .He also edited The James Brown Reader, an anthology of articles about the late Godfather of Soul. He contributed major articles on the films The Help and Pariah to The New York Times Arts & Leisure section in 2011. As a filmmaker George has directed the HBO film Life Support, and has two documentaries debuting in 2012: Brooklyn Boheme on Showtime and The Announcement: Magic Johnson on ESPN.