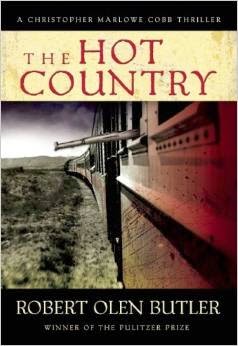 Mexico 1914 and although the European conflict of World War I is very much on the horizon it has not yet started and Europe is a long way, a very long way, from America. Much closer to home has been a brutal civil war in Mexico in which the dictator Porfirio Diaz was toppled and replaced by the equally brutal dictator Huerta, much to the chagrin of the United States and its President Woodrow Wilson who would have preferred a more benign leadership for its next door neighbour with some democratic credentials and a friendly attitude to the United States. In the hope of achieving this the US has landed a number of troops much to the anger of just about all Mexicans who do not see why they should tamely accept what is in effect American colonialism however dressed up as being well-intentioned. Meanwhile fighting is still continuing under a variety of leaders including such well-known names as Emilio Zapata and Pancho Villa. Into this maelstrom comes Christopher (Kit) Marlowe Cobb, a journalist on the scent of a hot story in particular the docking at the port of Vera Cruz of a German-registered ship with a cargo of arms – destined for which faction? Kit has to find out. Particularly intriguing is the role of a mysterious passenger on that ship – very much the heel-clicking duelling-scarred militaristic Prussian aristocrat. With the aid of a small street urchin Kit finds out enough to establish that the aristocrat's purpose is indeed to establish contact with a group of rebels. And with a passport taken from the body of a German bandsman Kit travels on the same train as the mysterious aristocrat to the heart of one particular group of rebels, that led by Pancho Villa. Speaking virtually no German he needs all the actorly skills he learned from his mother to carry off the impersonation. And once there he also encounters Luisa Morales, laundry maid and revolutionary fighter, whom he has previously encountered several times and by whom he is deeply intrigued.

The author has won several Pulitzer prizes, is a well-known critic and has written a number of novels.

This is a highly literary novel with a writing style clearly paying homage to writers such as Raymond Chandler, Ernest Hemingway and Cormac McCarthy. While I can recommend it as an interesting and challenging read, it does assume a knowledge of US foreign policy of the period which British readers may not have even if names such as Zapata and Pancho Villa are vaguely familiar. I had to do quite a bit of digging on-line to put the action into some sort of context so as to write this review. But I was able to establish that it is very much based on fact. Some readers may find Kit's histrionic actress mother a trifle tedious, although her constant self-dramaticisation, told in a series of flashbacks, does have a function in the plot. There are sequels, The Star of Istanbul and The Empire of Night, in which Kit's mother has a strong on-stage role. But will he ever be sufficiently free of her to form a viable attachment of his own? Well, maybe, maybe not.
------
Reviewer: Radmila May

Robert Olen Butler  was born 20 January 1945 in Granite City, Illinois, US.  He was educated at the University of Iowa (1969) and Northwestern University (1967).  His short-story collection A Good Scent from a Strange Mountain was awarded the Pulitzer Prize for fiction in 1993
Posted by Lizzie at 21:55