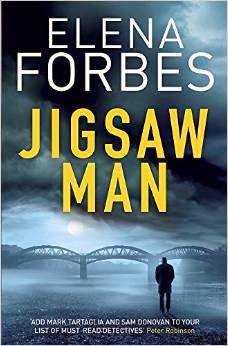 After a heavy night’s drinking which ended in bed with a woman he had just met, DI Mark Tartaglia is awakened by Constable Nick Minderedes banging on his door. Struggling to get himself together as they speed away, Tartaglia enquires as to their destination. “The hotel Dillon in London’s  West End, a woman has been found dead in a hotel room”. Tartaglia groans silently, he only left there a few hours ago.

Although, he quickly establishes that the dead woman is not the same woman he spend the night with, his relief is short-lived when he realises that he knows the dead girl.

His investigation brings a former member of his team, Sam Donovan back into his life.

As he absorbs the fact that someone he knew has been murdered, he receives the DNA results of a homeless man found dead in a burnt out car.  But the results are far from straightforward as the corpse has been assembled from the body parts of four different people.

Handling two murders takes some juggling and soon Tartaglia is under pressure from all sides to catch the jigsaw killer before he strikes again.

This is a page-turner. With the emotional murder hunt for the killer of someone he knew to the macabre but engrossing search for a serial killer for which initially they have no clues, just a desperate need to identify the individual body parts in the hope that they can find some connection.  With great characterisation both investigations are fascinating reading,.

I have enjoyed all the earlier books in this series, and heartily recommend this one.
------
Reviewer: Lizzie Hayes

Elena Forbes was born in London, and grew up in London in a family of writers and actors. She attended the University of Bristol. The protagonist of her novels so far is Detective Inspector Mark Tartaglia of the Barnes Murder Squad.
She still lives central London – a city she loves. Place is very important to her in terms of her writing and sets her novels in and around London as it offers a wealth of character, variety and history, which never ceases to inspire.