‘The Girl Who Wasn't There’ by Ferdinand von Schirach 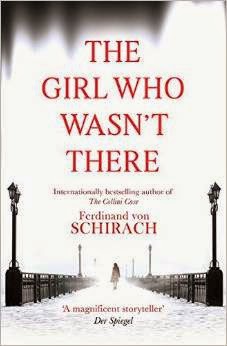 Sebastian von Eschburg, born into an aristocratic family from the German province of Southern Bavaria, once rich but now no more so, had a pretty wretched childhood. His parents were more concerned in ensuring that his behaviour conformed with their notions of how children should behave than in showing him love. At the age of 10 he was sent to a Benedictine boarding school; there he was not particularly maltreated and he discovered the pleasures of reading, retreating into a world that was more acceptable to him than reality. He also discovered that his visual senses were especially strong, enabling him to see the world in a myriad of colours. But when his father kills himself his mother sells the family home and buys an equestrian centre. Soon she has a lover and there is little room in her life for Sebastian who more and more is thrown back on himself. He meets a former pupil of the school who has become a photographer; Sebastian is attracted to the medium, specifically the industrial images: 'no human beings in them, harsh photographs with a backdrop of pale gray skies.” He becomes a professional photographer, earning his bread-and-butter through wedding photographs, graduation ceremonies and the like, but also establishing a reputation as an art photographer. He starts a relationship with a woman called Sofia and she is the model in a number of daring photographs which are both erotic and surreal and really make his name. The narrative then shifts to Monika Landau, a public prosecutor who is presiding over the highly aggressive questioning of Sebastian on a charge of murder of a young woman – no name, no body but evidence through bloodstained photographs, moreover a charge to which Sebastian has confessed. The narrative shifts again to Konrad Biegler, Sebastian's defence lawyer, a man of great experience who has featured in an earlier novel, The Collini Case. Biegler himself is going through something of  a mid-life crisis and has been despatched by his wife to a hotel in the mountains to sort himself out but when he hears of this case he hurries back, anxious to rejoin the world he knows. The hearing turns on the circumstances in which Sebastian's confession was made; if it was made under the threat of violence it is inadmissible no matter how willing Sebastian was to make it.

The author is a prominent defence lawyer in Germany. I found the chapters on the trial itself particularly interesting. The theme of the novel becomes apparent at the end; it is the contrast between reality and illusion, between deception and truth. The translation is excellent. Recommended.
------
Reviewer: Radmila May

Ferdinand von Schirach was born in 1964 in Munich, Germany. He is a German lawyer and writer. He published  his first short stories at the age of forty-five. Shortly thereafter he became one of Germany's most successful authors. His books have sold millions of copies worldwide and have made him "an internationally celebrated star of German literature." Schirach's books has been translated into more than 35 languages