‘The Bloody City’ by C B Hanley 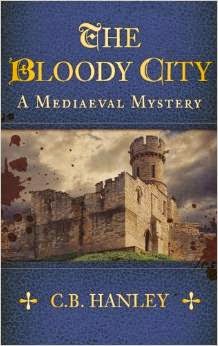 Lincoln 1217, the French are in charge of the city and besieging the castle, where the remaining English from the area have made a stand.  They are waiting to be rescued by reinforcements, but help is slow in coming.  Meanwhile, a resistance movement in the city is trying to help, but is being undermined by traitors who have aligned themselves with the French and are selling out the locals.

Edwin Weaver, now in the service of the Earl of Surrey, is enlisted for a dangerous mission.  He is to try and find out what the situation is regarding the troops in the city and get the information back to the forces coming to Lincoln’s aid.  Knowing that the last person who tried this got decapitated, he needs to keep his eyes and ears open, not only to find out what the French were up to, but also to root out the traitors before they betray him.

Mediaeval mystery and historical record of a chapter in the Anglo French relations, which I certainly did not know about, this is a gripping read.  The depiction of lives and hardship in the 13th century is written with conviction and a richness of detail and character which draws the reader into the time.  Treachery and murder are combined with the ruthlessness and bleakness of the conflict and its impact on the people in the besieged city.  Nicely crafted and very readable, I would recommend “The Bloody City” to anyone who enjoys a good murder story, particularly those who like a finely written historic backdrop.
------
Reviewer: Amanda Brown

C B Hanley (who also writes as Catherine Hanley) was born in Australia; since moving to the UK she has lived in Somerset and Sheffield, and is currently based in the Midlands with her husband and three children. Her love of medieval studies led to a PhD and a number of academic and non-fiction publications, but she decided that writing fiction was more fun.