‘Killer in Black’ by Paul Bennet 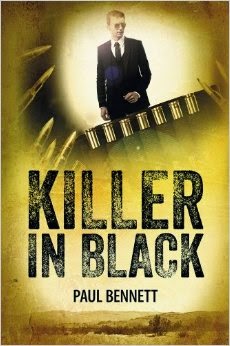 This is the story of five ex-mercenaries who turn up in a Texan town and, as expected cause a bit of a stir.  They are trying to help one of their own, who owns a ranch which is being attacked by locals and hired thugs.  The first thing to find out is why, is it just plain prejudice or is there something more behind it?  One thing that they do know is that the mastermind behind the attacks is a professional killer and he is good, but is he better than they are?

The mercenary team, led by their leader, Johnny Silver, meet the challenge. Facing biker gangs and hippies, along with a racist senator they have to match the thinking and strategy of the assassin, as well as dealing with the reality that they are no longer as young or as fit as they were.

This is not the kind of book I would normally have picked up, as it is more of an adventure mystery than a straightforward crime thriller.  However, the narrative is plotted nicely and speeds the reader through a good story with some interesting characters and more depth than is usual for this style of tale.  The characters are engaging and the fast pace makes you want to keep going to see what happens.  Enjoyable reading.
------
Reviewer: Amanda Brown Paul Bennett was born in London and got a scholarship to attend Alleyns School in Dulwich. He graduated from Exeter University with a degree in Economics and went into marketing. After seven years working for an advertising agency, he set up a market research agency. Five years later, its turnover had grown to £3m and he sold it to a communications group. He had to work a five-year contract as part of the sale deal and then, when that was over, he semi retired to devote more time to writing.
His first four books (the Shannon series) focus on frauds which Nick Shannon uncovers. His next book, Catalyst, is a thriller based on the machinations of the petrochemicals industry. His current series (Mercenary and Killer in Black) are thrillers and feature a group of aging mercenaries who get together for one final job (and then another etc.). Paul is working on the third of that series at the moment.
In his spare time, Paul is a keen bridge player and has achieved the rank of Premier Master. Paul also works as a ‘script doctor’, reading and reporting on novels by unpublished authors. He lives in rural Essex with his wife and daughter.