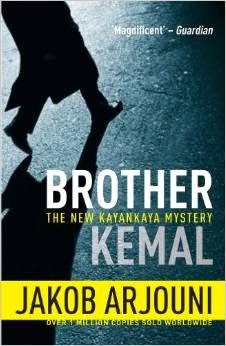 In this, the fifth and last of the series, featuring Kemal Kayankaya, a private detective of Turkish origin but who was brought up in a German family and has worked in Frankfurt, Kemal is hired to find the missing teenager Marieke, only child of the glamorous Valerie de Chavannes (French) and successful artist Edgar Haisselbank (Dutch), without involving the police. Valerie suspects that Marieke is with her latest boyfriend, photographer Erdan Abakay. Abakay is easy enough to find and Marieke is indeed with him but the photography is just a front for a prostitution racket involving young girls especially if they are, or can be presented as, virgins. But when Kemal does find Abakay and Marieke in the former’s apartment there is also a dead man, a would-be customer for Marieke. Kemal’s job is to get the terrified Marieke out of the apartment and back to her mother, and to disable Abakay in such a way that the police will suspect him of the murder. Not only that, he wants to shelter Valerie from the knowledge of what had happened to her daughter while at the same time Marieke is still besotted with Abakay. Having succeeded in all this, Kemal is then free to undertake his next job which is to act as bodyguard to first-time novelist Malik Rashid at the Frankfurt Book Fair. Malik’s novel involves a police detective in a fictitious Muslim country who discovers that he is homosexual, a concept dangerous enough to attract threats from fanatics, especially when coupled with trenchant criticism of rigid Islamic societies. But at the same time Malik’s desire is to attract as much attention as possible so as to enhance his novel’s commercial success. However, Kemal finds that the Abakay case isn’t entirely over; Abakay has been arrested but Valerie and Kemal are being threatened are being threatened, obliquely but unmistakeably, by Abakay’s uncle Sheikh who passes himself off as an Islamic scholar but who is in reality as much in Frankfurt’s criminal underworld of drugs, prostitution etc as his nephew. Then Malik disappears, probably kidnapped, and Kemal’s two jobs collide.

Arjouni’s first novel was published when he was only twenty and he quickly established himself as a substantial crime writer in Germany in the vein of Raymond Chandler and Dashiell Hammett. But his career was sadly cut short when he developed pancreatic cancer from which he died. His detective novels are not only crime-solving stories but also concern with such current issues as racism, organised crime, the limits of free speech and religious tolerance, sex trafficking, and the fall-out from the Balkan wars. Yet there is also humour, for instance, in the depiction of Malik and other egotistical authors at the Frankfurt Book Fair. As a character Kemal is in the Philip Marlowe tradition: a man who can bend the rules to achieve justice, with his own ethical code, and able to hold his own in Frankfurt’s very mean streets. The translation is excellent. Recommended - especially for Chandler and Hammett fans.

There are apparently getting on for 1000 German crime writers but very few have been translated into English. Some are listed on the website www.eurocrime.co.uk/books/books_Germany.html but many appear to have been published some time ago and/or are not set in Germany. There are two German crime writers in the Crime Writers Association Directory but these appear not to have been translated.
-------
Reviewer: Radmila May
Other Kemal Kayankaya titles by the author: Happy Birthday, Turk; More Beer, One Man, One Murder; Kismet. 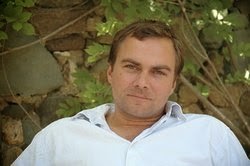 Jakob Arjouni was born in Frankfurt, Germany in 1964, the son of acclaimed German playwright Hans Gunter Michelson. He was only 20 when his first bestselling crime novel was published and he is the author of numerous other books, including Magic Hoffmann (1996), shortlisted for the IMPAC Award, and Chez Max (2006), an original and thoughtful fictional response to 9/11. But it is for his series of five mysteries featuring Turkish immigrant detective Kemal Kayankaya - Happy Birthday, Turk! (Filmed by Doris Dörrie); More Beer; One Man, One Murder (Winner of the German Crime Fiction Prize); Kismet and Brother Kemal - that he has become best known.
Translated in 23 countries, his books have sold over 1 million copies worldwide and his work both inside the crime genre and beyond makes Jakob Arjouni a formidable figure in modern German literature.
Sadly Jakob Arjouni died from pancreatic cancer in January 2013, aged just 48.
Posted by Lizzie at 13:21