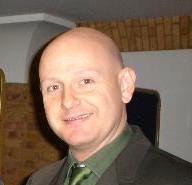 Leigh:              You work tirelessly to run CrimeFest, one of The Guardian's 'Best Crime-Writing Festivals in the World'. What inspired you to start up the foremost UK  convention for crime writers?
Adrian:           Well, Donna, Myles and I organised the US’s 2006 Left Coast Crime (LCC) as a one-off visit to the UK when the central LCC organising committee didn’t have any volunteers to organise that year’s convention. As far as we were concerned, when LCC 2006 was over, that was it: we were done. However, readers, authors and publishers persistently asked us to continue. Readers wanted us to do so because the social aspect of a convention (where everyone is equal and comes together to celebrate crime fiction – central to US events) hadn’t been around since the first few Manchester Dead on Deans conventions. Authors wanted a British version of LCC because any commercially published author would be eligible for a panel. (All other UK crime fiction events were – and still are as far as I’m aware – by invitation only.) And the reason publishers wanted us to go on was due to the large sponsorship fees that were being charged for authors to appear at some other UK festivals. We didn’t want to cause confusion and dilute the LCC brand, so we set up CrimeFest, which is now in its 7th year. As for us being the foremost UK convention for crime writers: thank you for saying so, but I don’t think we’re quite there yet. (Also, we don’t limit ourselves to writers.) But we like our reputation for being the friendliest.

Leigh:              It's hard to believe CrimeFest only started in 2008. How do you feel about the phenomenal success the event has achieved in such a short time?
Adrian:           You often hear authors say it has taken them years to become an overnight success and I think the same is true for CrimeFest. It has taken us a few years to find the right format, but because of the friendly social atmosphere readers, authors and many publishers have stuck by us. Another important factor may be that the author mix changes from year to year, and that keeps the panels and experience ‘fresh’.

Leigh:              While CrimeFest attracts many bestselling authors like Lee Child and Nicci French, you remain generous in your support of debut authors. What advice would you offer to authors new on the scene?
Adrian:            The most important piece of advice I ever heard someone give a new author was to keep a box of first editions stashed away somewhere. Once they hit the ‘big time’ they are going to be worth a fortune. With regard for general attitude to readers, fellow authors, etc: try to be friendly and approachable in person and in public, and don’t be pushy about your book. The latter is a killer and, if they like you, they’ll be interested in your work. And word-of-mouth is the best kind of promotion.

Leigh:                How do you see the future for self published authors, and for the traditionally published?
Adrian:             Due to the success of some authors with e-publishing, I am gradually beginning to be persuaded that self-publishing might be the way to go for some. There is a reason why publishers are taking on self-published writers like Tom Vowler and Kerry Wilkinson. And of course established names like Zoe Sharp are now going down the self-publishing route as well. But it is a headache for convention organisers and organisations like the Crime Writers’ Association. How are conventions and professional organisations going to determine the ‘legitimacy’ of authors? What criteria should be applied? This year, for the first time, CrimeFest is organising and moderating an Indie Voices Panel. We were fortunate that Joanna Penn, a leading voice on electronic and self-publishing, established a selection process. As for traditional publishing, I think it will continue, adapting to trends and new technology.

Leigh:                I have seen serious discussions online about whether all writers are insane. What do you think?
Adrian:              That’s a blanket statement. I know authors who are sane and practical, and I know authors who are bonkers. Though there is one thing they must all have in common: self discipline. Like many people I’ve tried writing fiction myself, and it is not easy. I still haven’t mastered being able to sit myself down and write day after day.

Thanks for taking time out to chat to us Adrian. 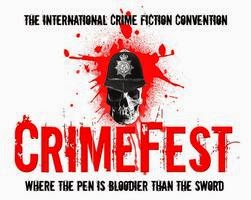 First organised in June 2008, CRIMEFEST has not only become one of the biggest crime fiction events in Europe, but also one of the most popular dates in the international crime fiction calendar.
The annual convention was featured as one of the ‘best crime-writing festivals around the world’
in the Guardian and one of the ‘50 Best Festivals’ in the Independent.
CRIMEFEST draws top crime novelists, readers, editors, publishers and reviewers from around the world
and gives delegates the opportunity to celebrate the genre in an informal atmosphere.
2014 Highlights include:
Gala Dinner
Interviews with the featured Guest Authors and Toastmaster
the eDunnit, Goldsboro Last Laugh and Sounds of Crime Award presentations
In addition, there will be some fifty author panels with more than a hundred participating authors,
crime writing workshops, a pitch-an-agent strand, and much more.