‘What the Cat Saw’ by Carolyn Hart 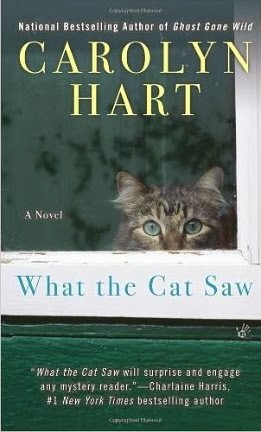 I have to confess to a strong resistance to murder mysteries in which an animal plays a key role in the investigation, so I approached this one with a certain amount of trepidation. But I took a deep breath, suspended disbelief a little further than usual, and before long I was not only convinced but absorbed in the unfolding narrative.

The cat does play a key role, but only insofar as it opens the protagonist’s eyes to one vital clue that no one else has picked up. My natural scepticism was assuaged by the lead character’s own dubiousness over whether she was following the cat’s eye view or her own instincts, and enough other evidence piled up to ensure that the solving of the mystery didn’t rely too heavily on feline observation.
In a nutshell: investigative journalist Nela Farley, out of work and emotionally raw after her fiancé’s death in Afghanistan, temporarily takes over her sister’s job at a charitable foundation. She stays at the apartment of its late CEO, who died recently in an accident – and finds that the CEO’s cat, which she has agreed to care for, saw something which could suggest foul play. Nela’s suspicions are further raised by a break-in at the apartment and her discovery of a valuable necklace hidden there, and the plot thickens further when she discovers that the charitable foundation has other problems, and is not a comfortable place to be. Soon she is under suspicion herself, but thanks to the clearsightedness of Steve Flynn, the editor of the local newspaper and nursing emotional issues of his own, she soon finds herself on the right side of the investigation.

Cat’s eye view aside (and on balance it does add an extra dimension, though the narrative could be made to work perfectly well without it), What the Cat Saw is a well-crafted mystery with plenty of skilful misdirection, and a colourful cast of characters, even the most minor of whom is sharply drawn. The beautiful headquarters and internal politics of the charitable form an excellent and vividly portrayed background, and the budding romance between Nela and Steve is handled subtly.

Carolyn Hart is a prolific author, well-known in the USA but  unfamiliar to me. It’s always good to find new names to look out for, and better still to be proved wrong when the first taste of an author’s work doesn’t seem to be entirely appealing at the outset. Hart clearly knows her craft; lovers of cosy mysteries will find much to enjoy in her work. Despite my early reservations, I certainly did.
------
Reviewer: Lynne Patrick

Carolyn Hart is a native of Oklahoma City, a Phi Beta Kappa journalism graduate of the University of Oklahoma, and a former president of Sisters in Crime. She taught professional writing in the University of Oklahoma School of Journalism from 1982-85. She is the author of 49 mysteries, winner of three Agatha Awards for Best Novel, two Anthonys and two Macavitys. She is also a member of Authors Guild, Sisters in Crime, Mystery Writers of America, the International Crime Writers Association, the International Thrillers Association, and the American Crime Writers League.
http://www.carolynhart.com 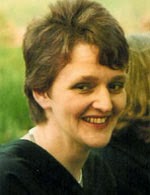