Alanna Knight is one of the most popular authors in UK libraries. Named as one of The Times’ “100 Masters of Crime”, she is a leading crime writer with three historical crime series: the Victorian detective Inspector Jeremy Faro,
lady investigator Rose McQuinn, and time-traveller Tam Eildor.
She has published 75 works which include romance, thrillers, historical novels and non-fiction. Alanna is an authority on Robert Louis Stevenson and she has written true crime, 'how to write' guides and biographies.
Hon President of Edinburgh Writers' Club, Honorary President and founder
member of Scottish Association of Writers, member of Society of Authors and Crime Writers' Association, and Mystery People.  She appears regularly at
Edinburgh International Book Festival and many other literary events.

Leigh: You recently celebrated the 40th anniversary of the publication of your very first novel. How did the publication of a novel then differ from what happens today?
Alanna: Much easier!   In 1968 I was living in Aberdeen. I was their novelist, every bookshop window packed with copies of Legend of the Loch. And ‘Mother of two writes novel’ was a big headline in the local papers, followed by invitations to open garden fetes, speak at literary lunches. etc.  No computers then, we wrote everything on a portable typewriter! Changed days!

Leigh Do you feel a similar excitement when a new book is published now, or has the whole publication process become less thrilling over time?
Alanna: Every new book (even number 75) brings that same thrill and excitement as the first one. Something I have never – and will never – lose .

Leigh: Your experience of writing spans four decades and over seventy publications. What advice would you give to aspiring and new authors writing today?
Alanna: Write  for yourself, the book you have always wanted to write, the one that is You! Don’t try to imitate that bestseller you’ve just read and hope to make a fortune like its author.  Publishers don’t want the same again from aspiring and new authors. They are looking for new ideas, new angles on old plots.  And always, always keep a notebook handy.

Leigh: You are an incredibly prolific writer with three historical crime series to your name, plus non-fiction books, and plays. Where do you find all your ideas?
Alanna: Places and people trigger ideas for me and  history is full of crime plots!.   I’m usually thinking ahead. Writing one book, researching the next and keeping an eye on the  shadowy trail to the one after that.

Leigh: With so much writing, you still find time to teach, and attend events as a member of Femmes Fatales. Are you very organised, with a regular writing routine, and has technology changed the way you work at all?
Alanna: Technology hasn’t changed it for me. I can’t think into a machine. I do all my writing by hand in a lined notebook before it goes to the computer.

I work to a strict routine, no coffee mornings while on that self-imposed deadline.  1,000 words minimum. Afternoons off, and in the evening if I’m not socialising or tempted by TV a bit of editing and notes for next morning.  (But it’s not all work and no play. I find walking and a weekly art group very pleasant relaxations.)

Here’s a trick I’ve learned.  If you find it difficult getting started each day, try leaving an incomplete sentence on the computer.

Leigh: Do you plan your books in advance in minute detail, or do you allow your characters and plots to develop as you are writing?
Alanna:             I have only the basic idea and that is enough to start with. Writing a series has one great advantage,  You only change the setting each time. I never write a synopsis and I make my characters work for a living, frequently telling Inspector Faro, Rose or Tam: ‘Come on – this is your story! You tell me what happens next.’

Leigh:                Has writing become easier with experience?
Alanna: I  have been writing  since I was about 8 years old (had poems and so forth on Children’s Hour)  short stories published in my twenties. Wrote my first novel at 15. There are four others also unpublished, my nursery slopes for learning to write or how not to write) before we had writers’ circles,  etc.

Leigh: You recently started a blog. How important is it for an author to have an online presence today, in your opinion?
Alanna: The most important thing for any author is the website.  www.alannaknight.com has brought some very important contacts.  (I was talked into the blog!  Nothing against Twitter, Facebook, etc I just don’t have time.

Leigh: As if you're not already busy enough, last December you wrote a ghost story. Are there any other genres you would like to explore?
Alanna: I have published in most of them including historical novels, romantic suspense, biography, true crime, stage and radio plays and documentaries, short stories.   And my ghost story The Midnight Visitor has crime at its heart, rooted in murders past and present.

Leigh: Finally, I'm sure we would all like to congratulate you on being awarded an MBE. You must be very proud. Has the honour changed your life in any way?
Alanna: Thank you. I am proud and honoured that ‘for services to literature’ includes years of adjudications and teaching, getting other writers a foothold on the publishing ladder. I believe that writing is a gift and as such it should be shared. 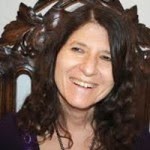 Leigh Russell is the author of five books Cut Short, Road Closed, Dead End, Death Bed and her latest book Stop Dead, published May 2013. Cold Sacrifice the first in a new series featuring Ian Peterson will be out  later this year in print, (already out as an ebook).
Cut Short (2009) was shortlisted for the CWA New Blood Dagger Award for Best First Novel. Leigh studied at the University of Kent gaining a Masters degree in English and American literature. A secondary school teacher, specializing in supporting pupils with Specific Learning Difficulties as well as teaching English, Leigh Russell is married with two daughters and lives in Middlesex.