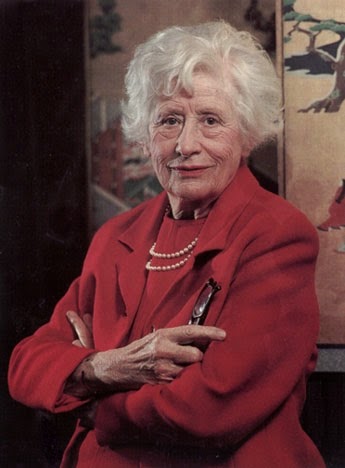 Ngaio Marsh was born and educated in Christchurch, New Zealand.  Ngaio is a Maori name that means 'clever' and Ngaio Marsh was certainly well named.  She was multi-talented and loved writing, acting and painting, but, when she left school, chose to study painting and entered the Canterbury School of Art in 1913.  She left the art college in 1919 and planned to make her career as a painter while writing short stories, articles and poetry.  However she got distracted by the opportunity to tour the North Island with the Allan Wilkie Shakespeare Company (1919-20) and followed this by touring with the Rosemary Rees Comedy Company.

Throughout the 1920s Marsh divided her life between the theatre, writing poetry and stories and painting, exhibiting with 'The Group, seven Christchurch artists who made a great impact with their work.  In 1928 Marsh visited Britain for the first time as the guest of a wealthy New Zealand family who had maintained connections with Britain.  From that first visit, Marsh loved Britain and, in 1929, she set up a small shop in Knightsbridge.

In 1932 Marsh returned to New Zealand to look after her sick mother. In 1934 she wrote A Man Lay Dead, featuring Detective Chief Inspector Roderick Alleyn, a detective at Scotland Yard.  This was the first of thirty-two crime novels featuring Alleyn, who ended his career as Detective Chief Superintendent.  Most of the novels are set in England but a few are set in New Zealand (Vintage Murder, Died in the Wool, Colour Scheme and Photo Finish.)  In Surfeit of Lampreys the story begins in New Zealand but the main action takes place in London.  Occasionally Marsh uses her travels in Europe as the background for her novels (When In Rome and Spinsters In Jeopardy.)

Ngaio Marsh is one of the Golden Age 'Queens of Crime' and Roderick Alleyn is very much a Golden Age detective hero: handsome, well-born (his brother is a baronet) and highly intelligent, he is also unfailingly courteous to those of a lower class or less wealthy than he is.  His usual assistant at Scotland Yard is Inspector Fox, a solid and reliable officer and they share a mutual respect.  In A Man Lay Dead Alleyn meets Nigel Bathgate, a young reporter who, in later novels, likes to describe himself as Alleyn's 'Watson.'

In 1938 Marsh returned to England from New Zealand after travelling through Europe, and it was on board ship that she wrote Artists In Crime, her sixth book featuring Alleyn.  The opening chapter is set on just such a ship and relates how Alleyn first met Agatha Troy.  Troy is a famous artist and many people think Troy is Marsh's alter ego.  Alleyn falls in love with Troy and, although she refuses him in Artists In Crime, she does not stand out against him for long and they marry at the end of Marsh's next book, Death In a White Tie, also written in 1938.  Troy and Alleyn have one son and remain happily married for the rest of the series.  Troy appears in many of the subsequent books and sometimes, as in  A Clutch of Constables Shrouds, has a very prominent role in the story.

During the Second World War Marsh joined the Red Cross Transport Unit in New Zealand.  After the War Marsh divided her place of residence between Britain and New Zealand, just as she divided her time between writing, painting and the theatre.  She formed a theatre company and directed many productions.  In 1967 the University of Canterbury named its theatre after her.

Throughout all her books Marsh's passion for the theatre and for art is obvious and provides settings and characters for many of her books.  The theatre is especially prominent, as is her passion for Shakespeare.  Also evident is her interest fascination with Maori customs and her corresponding interest in traditional English customs.

Marsh started her crime writing career with A Man Lay Dead, a classic 'country house murder,' and this was a formula she kept returning to.  Even some of her novels set in New Zealand, such as Died In the Wool, have the same structure.  Although Marsh says that Alleyn served in the First World War, his experiences are glossed over and have left no physical or emotional scars.  Marsh mentions the Second World War in her novels (indeed the subplot in Died In the Wool is that Alleyn is seconded to New Zealand to uncover Nazi spies) but she does not allow the privations and change of attitudes that followed the War to mar her picture of the England of country houses and high-born eccentrics.
Marsh's last novel, Photo Finish, was published in 1980.  She died in 1982.  The honours awarded to her included Dame of the British Empire, the Mystery Writers of America Grand Master Award and New Zealand's first literature award bears her name.  Her home in Christchurch is maintained as a museum in her memory.
-------
‘Surfeit of Lampreys’ by Ngaio Marsh
First published by Penguin Books Surfeit of Lampreys is now available on Kindle or in a three-books-in-one volume published by Harper. ISBN-10: 0007328729.  ISBN-13: 978-0007328727 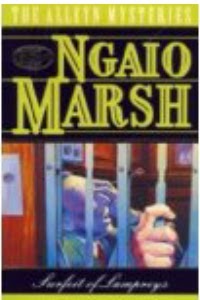 The story opens in New Zealand when young Roberta Grey is befriended by the Lamprey family, English aristocrats temporarily living in New Zealand.  It continues when Roberta, aged twenty and newly orphaned, arrives in England to stay with the Lampreys in London.  The Lampreys are a large family: Lord and Lady Charles and their children, Henry, Frieda, twins Stephen and Colin, Patricia and Michael.  They are all attractive, funny, lively and extravagant.  Of the four adult children only Henry, the eldest, realises that they should alter their lifestyle.

One of the Lampreys' inevitable financial crises is looming and the only hope of avoiding bankruptcy is for Lord Charles to receive aid from his disapproving, joyless and tight-fisted older brother, Lord Wutherwood.  With a debt-collector sitting in the kitchen, only the Lampreys would decide that the best way to soften Lord Wutherwood towards them was to hold a charade to entertain him during his visit.  The scheme was not successful and Lord Wutherwood storms out.  He has to wait in the lift that serves the flat for some time until he is joined by his loathsome wife, Violet.  The lift goes down a few floors and then up again and when the doors open Lord Wutherwood is dying, stabbed through the eye by a skewer that had been used in the charade.

Detective Chief Inspector Roderick Alleyn of Scotland Yard is called in to investigate.  Coming from the aristocracy himself, Alleyn has no problems dealing with the Lamprey family on equal terms.  Unwisely they close ranks and refuse to tell Alleyn all he needs to know.  There are many things Alleyn has to discover.  Was Lord Wutherwood stabbed before his wife joined him and the lift doors closed?  Which twin, Colin or Stephen, operated the lift for their uncle and why are they being so secretive?  Did Lady Wutherwood behave so irrationally before the shock of her husband's death?  Alleyn soon discovers that the Lampreys are all charming and amoral, but are any of them capable of murder to inherit their uncle's wealth?  Before Alleyn can answer any of these questions there is another murder.

In Surfeit of Lampreys, the murder of Lord Wutherwood is gruesome but the tone of the book is light and often playful and the solution is revealed in a scene of theatrical melodrama.  Even at the height of the investigation, Marsh draws humour out of Alleyn's attempts to question the Lampreys' deaf aunt: 'Alleyn wondered distractedly if there was anywhere at all in the flat where he could yell in privacy into the ear of this lady.  He decided that the best place would be in the disconnected lift with the doors shut.  By a series of inviting gestures he managed to lure her in.'

Surfeit of Lampreys was published in 1941 but Marsh made sure the light tone of the book was not marred by setting it just before the Second World War.  The approach of war is only mentioned fleetingly.  A large number of Ngaio Marsh's crime novels have a love story as a sub-plot and in this book it follows Roberta Grey's growing love for Henry Lamprey, even though she cannot believe he could feel anything more than kindness for her.  The title Surfeit of Lampreys indicates the light-hearted, punning spirit of the book.  King Henry I was reputed to have died of overeating a 'surfeit of lampreys,' a small, eel-like fish of which he was too fond.

All of the Roderick Alleyn detective stories are an enjoyable read but Surfeit of Lampreys is probably the most humorous.  The fun starts on the first page with a description of Lady Charles' economy measure of dismissing the servants and buying 'the washing machine that afterwards, on the afternoon it broke loose from its mooring and so nearly killed Nanny and Patch.'  After seventy-five years, Surfeit of Lampreys is still an enjoyable read to cheer a winter's day.
------
Reviewer: Carol Westron

Carol Westron is a successful short story writer and a Creative Writing teacher.  She is the moderator for the cosy/historical crime panel, The Deadly Dames.  Her crime novels are set both in contemporary and Victorian times.  The Terminal Velocity of Cats is the first in her Scene of Crimes novels, was published July 2013
www.carolwestron.com