‘We’ll Be Watching You’ by Eileen Robertson 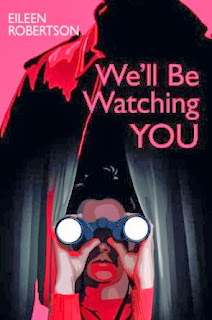 Christine Brett has taken Neighbourhood Watch to heart - the emphasis being on the word ‘watch’.  She has even furnished her invalid mother Emily with a pair of binoculars to keep watch in her absence. Having reported her neighbours for several trivial offences, she has become, not surprisingly, unpopular with her neighbours.  Most infuriated is retired Harry Myers when he is visited by the police in connection with a robbery.  Christine defends herself saying that his car is the same colour and make as the getaway car described in the newspaper.

But matters take a dramatic turn when shopping in the local supermarket - she witnesses a robbery, and is shocked to find the face of the getaway driver  familiar. But from where?  Unfortunately Christine falls into the category of the girl who cried wolf just once too often, and no one believes her.   But if Christine recognised the driver, did her recognise her and what will he do about it?

There are some great characters,. I particularly loved Emily, whom Christine is determined to look after since her stroke. However, as soon as Christine is into the kitchen to prepare the evening meal, Emily pulls out of her cardigan the miniature vodka and takes a swift swig.  Go girl!

I enjoy this type of mystery- the quiet suburban estate where it looks serene on the surface and is all festering underneath.  Reminds me of Desperate Housewives, which I so enjoyed.

But as Christine is a sole witness to the robbery, and as she has recognised the driver she is right to be afraid. But what should she do? Who will listen to her?  Highly recommended
------
Reviewer: Lizzie Hayes 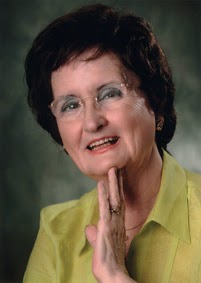 Eileen Robertson was born in Yorkshire and was for many years a lecturer in German and Creative Writing at Highbury College, Cosham, and at Portsmouth University. Eileen’s first cosy crime novel, Miss McGuire is Missing, was published by Robert Hale in July 2010. It went into reprint three months later and in May 2011 was taken up by Harlequin Books of Canada. Her second book, Blackmail for Beginners, was published in February 2012. Her third book, We’ll be Watching You, was published September 2013. Eileen’s books have been described as ‘cosy crime with a hard edge.’