‘Don’t Ever Get Old’ By Daniel Friedman 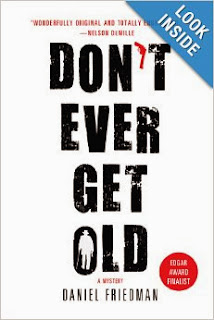 Daniel Friedman’s debut novel introduces Baruch “Buck” Schatz, an 87-year-old Jewish ex-cop from Memphis who is told, at the bedside of a long-time acquaintance trying to clear his conscience as he lies dying, about an ex-SS officer who’d been in charge of the prison camp
where they were interred in 1944, from whom he’d accepted a bribe to allow him to escape from Germany after the camps were liberated.  Buck had nearly been killed by the Nazi during the war, and still bears the emotional and physical scars.  He vows to try to track down the man, apparently now living in the US and ostensibly carrying a fortune in stolen gold bars.

The protagonist is an unforgettable character, self-described as “grumpy more for sport than out of necessity.”  No less unforgettable is his grandson, a student at NYU Law School named William Tecumseh Schatz, whose nickname is Tequila (apparently a frat thing).  (Of his grandson, Buck says “Maybe because he was family, I disliked him less than most other people.”)  Buck and Rose, his beloved wife of 64 years, still dealing with the loss of their only son six years prior at age 52, are now dealing with matters having to do with escalating frailty, both mental and physical.

A few murders take place as Buck tries to track down the ex-Nazi and the gold, and Buck and his grandson try to find the killer as the body count rises, as various suspects, including a Mississippi loan shark, a 300-pound Russian, and the Mossad, cross their path, often engulfing them both in threatening situations.  We are frequently reminded by Buck that “nobody’s innocent.”

Interspersed from time to time are brief passages from Buck’s notebook of “Things I Don’t Want to Forget” (primary among which is a reminder that “paranoia was an early symptom of dementia in the elderly,” important for him to remember since paranoia seems to be recurring
with worrisome frequency).  These are often more like ruminations than part of any story, but they are intrinsic to knowledge of the man, as well as occasional historical details.

Having somehow let the hardcover edition of this book escape me, I was delighted to see the paperback edition hit the shelves.  I had seen the starred reviews the book had received from Publishers Weekly, Booklist, and Kirkus Reviews, and after it won the prestigious Macavity Award for Best First Novel, I said ‘this is a book I must read!!”  And once I started it I was hardly able to stop reading, till today, when I put the book down, still smiling.  The author does not shy away from the occasional difficult and wrenching truths. Alternately laugh-out-loud funny, often poignant, frequently touching, and with a whale of an ending, the book is highly recommended. Parenthetically, of the title, I have two comments:  (1) I agree
completely; and (2) it’s too late :-(.
------
Reviewer: Gloria Feit

Daniel Friedman is a graduate of the University of Maryland and NYU School of Law. He lives in New York City. His first novel, Don’t Ever Get Old was nominated for the Edgar, Thriller, Anthony and Macavity awards, and was optioned for film by the producers of the "Sherlock Holmes" movies. His next book, Don’t Ever Look Back will be released in 2014. 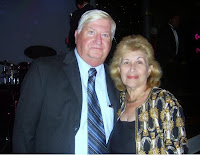