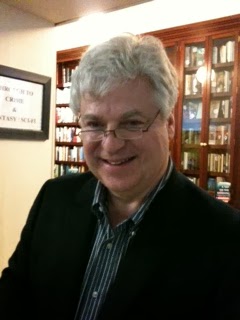 Linwood Barclay was born in the United States, but just as he was turning four, his parents took him to Canada.  The family eventually settling in the Kawartha Lakes region of Ontario. Linwood studied English Literature at Trent University.  His father died when he was 16, and Linwood essentially took over running the family business (an experience he wrote about in his memoir, Last Resort). At the age of 22, Linwood left the resort and got his first newspaper job, at the Peterborough Examiner. In 1981, he joined the Toronto Star, Canada’s largest circulation newspaper. For twelve years he held a variety of editing positions, becoming the paper’s humour columnist in 1993. A few thousand columns later, he retired from the paper in 2008 to write books full-time.

At Goldsboro Books on the 9th October 2013, I had the great pleasure of meeting one of my favourite authors whose book I leap upon as soon as they are released - Linwood Barclay.  He has kindly answered some questions which I share with you below.  Thank you, Linwood, for talking the time to chat with us.

Lizzie: You have just released your latest book A Tap on the Window. Can you tell us about this book?  Did the storyline come from your imagination or an experience you heard about?
Linwood: I was thinking about hitchhiking. The hitchhiker is a familiar device in crime and horror fiction, but I was wondering whether there was something new I could do with it. I thought, what if the hitchhiker you’d picked up had to briefly get out of the car, and after returning, it started to dawn on you that this was not the same person you’d initially picked up. Once I had that opening, and was happy with it, I had to figure out just what had happened, and why.

Lizzie: Having worked as a humour columnist for some years, you went on to write four comic thrillers featuring the character Zack Walker.  But your first real hit was with No Time for Goodbye. What prompted the change from comedy to the darker side of crime fiction?
Linwood: The Zack books, at the time, were not big sellers, although people are now discovering them and they are regularly being reprinted in the U.S. Funny mysteries are a pretty narrow genre, so I decided to switch gears and write a darker, non-series book. That was No Time for Goodbye.

Lizzie: Do you miss writing humour?
Linwood: There’s still humour in the new standalones, particularly in the sarcastic exchanges between characters. It’s just that with the earlier books, I constructed the plot to allow for comic situations. I don’t do that any more. Sometimes, I let things get out of control and make a scene too funny, and have to go back and tone it down. If you let things get too farcical in a regular thriller, you break the tension, and hurt the mood.

Lizzie:  I was intrigued by Trust Your Eyes.  Are the ideas for your books sparked by real events and
people, or do ideas just come to you? Or, a mixture of both?
Linwood: It’s both. Even when real events inspire me, what I end up writing is very different from the original news story. But real events can be terrific springboards to something else.

Lizzie: Your books are all stand-alone.  Have you ever been tempted to write a series?
Linwood: The four comic thrillers were a series, and I liked that.  It’s nice to have your characters all ready and waiting before you start writing. A Tap on the Window is my first book to feature an actual detective, so it’s very possible I will bring him back.

Lizzie: Do you plan your plots before you start writing?  And, if so, do your books change during the writing process, or do they pan out exactly as you originally planned?
Linwood: I need an opening hook before I start. I need to know most of my characters, who did what and to whom, and I like to know where I will end up. But the middle of the novel I don’t plan. I don’t see the opportunities that exist within the book until I get to them.

Lizzie:   When embarking on a new book, what area of the book challenges you the most?
Linwood: Plot. The plot needs to hang together, or nothing works.

Lizzie:   Do you have a favourite part of the writing process?
Linwood: Being done.

Lizzie: I read that a few years back you took a sabbatical to promote your books.  Do you find it difficult to balance the time spent in promotion against the time required to produce a new book?
Linwood: Actually, I took a year off  from my newspaper job to get another book finished. For five years, I had been writing a book a year while still doing about 130 columns a year, and it was killing me. So when No Time for Goodbye became a hit, I decided I could afford to take a year off from the paper to write Too Close to Home. But during that year I made the decision not to return to the paper, which was a very difficult decision. Not only did I love being a columnist, but I had a dental plan.

Lizzie: So Linwood what’s next? What are you working on now?
Linwood: No Safe House, the sequel to No Time for Goodbye, is finished and will come out in the fall of 2014. Now, I’m thinking about what the 2015 book will be, and would like to start writing it in January.