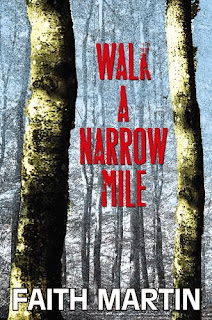 Although a complete story, the investigation in this book does relate back to the previous one, where Hilary was subjected to an attack by a man who had been stalking her. Unfortunately he was not caught and it now appears that he may be responsible for the disappearance of many other missing girls.  Also, her bosses are questioning whether she is up to the task after her ordeal.  But we long-time fans of the series have total faith in Hilary Greene.

Initially Hilary begins to doubt her own abilities as she fails to get a handle on the stalker but eventually by dogged police work she gets her breakthrough. Tightly plotted with great characterisation, as with previous books, I devoured this in one sitting, unputdownable!
------
Reviewer: Lizzie Hayes

Faith Martin  was born in Oxford. She began her working life as a secretary but left to pursue her dream of being a writer.
Posted by Lizzie at 16:38