‘The Backs’ by Alison Bruce 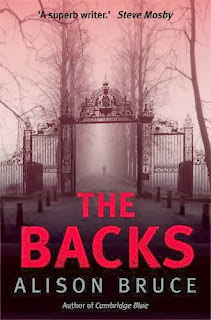 It is seven years since the murder of Becca Osborne, and her sister Jane had vowed never to return to Cambridge, but suddenly fate intervenes and against her will Jane finds herself back in the place that holds bad memories.

DC Gary Goodhew is investigating a burning car that leads to the discovery of a dead body.

Despite his murder investigation he is also looking into several report from drivers of a dishevelled blonde girl seen making her way barefoot on the outskirts of Cambridge, who looks as though she had been assaulted.

Whilst pursuing these three seemingly unrelated incidents Gary learns that the man convicted of Becca Osborne’s murder is now out on parole and has been seen in the vicinity of Jane Osborne, protesting his innocence of the crime.   Although not one of the original investigating officers Gary’s current boss DI Marks was, and Gary becomes intrigues and looks at the old care file and does some investigations of his own. This brings him into contact with Jane’s volatile father, sculpturer Gerry Osborne.

I read this book in one sitting unable to put it down.  Fast paced, the reader is drawn into three separate events, but are they totally unrelated?  Then Gary makes a shocking discovery, and matters escalate.  An intriguing mystery, that kept me guessing to the end. Most highly recommended.
------
Reviewer: Lizzie Hayes

Alison Bruce  was born in Croydon and grew up in Wiltshire. She has worked in all kinds of jobs, from admin to electro-plating and from DJ-ing to IT management. She didn't always plan to become a full time novelist but can't remember a time in her adult life when she wasn't carrying a notebook and pen and jotting down ideas. One day an idea grabbed her so strongly that she decided to tackle a full length novel.  Alison had moved to the Cambridge area in 1998 and decided to make it the backdrop for the books because of its unique mix of characteristics. It is a relatively small city but has a worldwide reputation for education and science. On its doorstep lie tiny and relatively primitive rural hamlets yet it has an airport and fast rail links into London. It is traditionally English but multi-ethnic, vastly wealthy in places but under privileged in others. Alison Bruce has also written two non-fiction books, Cambridgeshire Murders and The Billington, Victorian Executioner, both published by the History Press.