‘The Chalice’ by Nancy Bilyeau 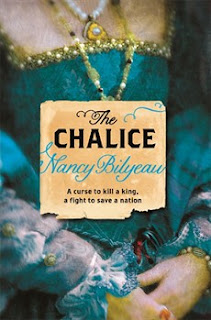 Joanna Stafford, past trainee nun and current aspiring tapestry entrepreneur is caught up in a chain of events, which puts her in danger of losing her head.

It is the time of Henry VIII.  Jane Seymour is dead and the king is looking for a forth wife, whilst continuing his dissolution of the monestaries and persecutions of anyone who he feels may threaten his hold on the crown of England.  Joanna's uncle, the Duke of Buckingham, has already fallen under the axe of Henry's insecurity and so any of her family is potentially in danger.  Joanna, having already tasted imprisonment in the Tower, does not help her plight by being a fervent opponent of Henry's religious policies and getting caught up in several dubious plots.

As a young girl Joanna was taken to a nun who had visions and gave her the first part of a prophecy which indicates that she may be instrumental in overturning Henry's reign of persecution.  The story explores her journey to get the other two parts of the vision and find some meaning from it.  Along the way she finds love, friendship, trouble and sadness as well as cementing her faith.  She also gets a wealthy patron for her tapestries.

This is an amazing book which I thoroughly enjoyed, and it got me looking up historical facts from 1538 when it was set.  All the characters including the rather devious Bishop of Winchester are well drawn and fleshed out throughout the narrative and the reader is dragged through Joanna's emotional highs and lows while she explores how she is going to survive her prophecies and restore England to what she believes is the the true faith.

A brilliant read, and certainly one which will get me looking out for future exploits of Joanna Staffford and any other works from Nancy Bilyeau.
-----
Reviewer: Amanda Brown 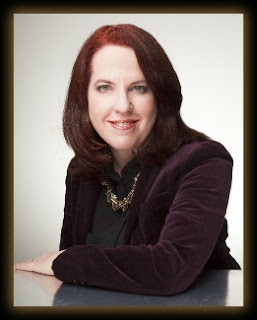 Nancy Bilyeau Nancy Bilyeau has worked on the staffs of InStyle, Rolling Stone, Entertainment Weekly, and Ladies Home Journal. She is currently the executive editor of DuJour magazine. Her screenplays have placed in several prominent industry competitions. Two scripts reached the semi-finalist round of the Nicholl Fellowships of the Academy of Motion Pictures Arts and Sciences. Her screenplay "Zenobia" placed with the American Zoetrope competition, and "Loving Marys" reached the finalist stage of Scriptapalooza. A native of the Midwest, she earned a bachelor's degree from the University of Michigan. The Crown is her first novel.
Some earlier milestones: In 1661, Nancy's ancestor, Pierre Billiou, emigrated from France to what was then New Amsterdam when he and his family sailed on the St. Jean de Baptiste to escape persecution for their Protestant beliefs. Pierre built the first stone house on Staten Island and is considered the borough's founder. His little white house is on the national register of historic homes and is still standing to this day.
Nancy lives in New York City with her husband and two children.