‘Fit To Be Dead’ by Nancy Glass West 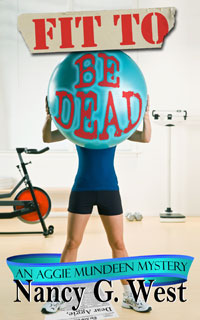 Aggie Mundeen, has moved from Chicago to San Antonio, Texas.  Approaching her forties she has decided that she needs to investigate improvement to combat the aging process, particularly before anyone realises that she is the ‘Dear Aggie’ who writes the ‘Adventures in Staying Young’ column.  As part of her new physical fitness regime she has registered in graduate school for the course Aspects of Aging.  Now she decides to check out the Fit and Firm Health Club.

Obtaining a guest pass she sets of to investigate the facilities, and in minutes she meets gorgeous Pete Reeves, who offers her a tour of the work-out rooms, handsome hunk Mickey Shannon who has a strong resemblance to Tom Selleck, and friendly Ned Barclay. The girls in the women’s locker room are not quite so friendly.  But before she can cement any friendships she finds a body in the pool. Luckily prompt action on her part averts disaster, but was it really an accident?

On her next visit to beat the flab Aggie is not on hand to avert a death, and is determines to find the killer. Meanwhile, Detective Sam Vanderhoven turns up - she and Sam have been friends along time.  Aggie would like something more, but whilst thrilled to see him, is aware that he will hamper her investigations.

Her methods are hilarious.  I laughed so much I had to put the book down to find tissues to mop up my eyes which were streaming, I had laughed so much. Her descriptions on the work-out were wonderful – we’ve all been there, in my case never to go again.

There are some great characters in the book, and it swings along.  It’s a good plot and keeps the reader guessing, although all the clues are there. A light-hearted read, romance, murder and fun, what more could you want in a book. Recommended.
------
Reviewer: Lizzie Hayes 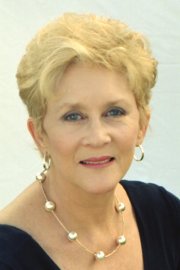 Nancy Glass West When Nancy G. West was seven years old, she and her mother wrote poems to each other on special occasions. In high school, the Library Journal Pegasus published Nancy’s poem. At eighteen, she realized she might have to get a real job.  She heard journalists were underpaid and English majors were selling lingerie, so she studied General Business at the University of Texas and University of Houston and earned a BBA.
A few years later, married, with two daughters, Nancy realized she had to study English literature and write. She read numerous books on writing and wrote articles, poetry, and the biography of artist Jose Vives-Atsara (Shoal Creek Publishers). She founded Book Publishers of Texas, edited their trade journal and promoted their books for seven years. While earning her MA in English literature at University of the Incarnate Word, San Antonio, she began writing Nine Days to Evil, a novel of psychological suspense, Shakespeare, and nonstop-action which won the Blether Gold Award. As West finished, Nine Days to Evil Meredith Laughlin’s story, Meredith’s “mature” graduate school friend, Aggie Mundeen, took over West’s consciousness. The result was the author’s creation of the Aggie Mundeen Mystery Series.