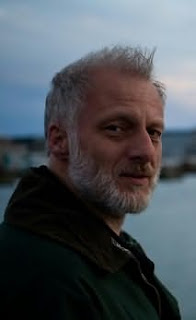 Leigh Russell in Conversation with Quentin Bates
who is a writer and journalist.
His first crime novel was published in 2011 as Frozen Out in the UK, Frozen Assets in the US. It is set in present-day Iceland in the months leading up to the collapse of the banks. 2012 saw the publication of the second novel in the series.  Cold Comfort is set in an Iceland coming to terms with the recession.
The latest book is Chilled to the Bone,
set in post-recession Iceland and the depths of winter.
.

Q   You mention somewhere that you have always been a big reader. Is reading as necessary to you now as it was before you started writing?
A   Definitely, probably even more so. There’s less time for reading these days, so I’m probably more selective than I used to be and rarely embark on a book unless I’m fairly sure it’s going to be a good one. I’m also reading a little more widely these days and I’ve found that the Kindle my daughter gave me has helped discover all sorts of things that I’d probably not otherwise have found.

Q   You say on your blog that you ‘have always seen fiction as a mug’s game.’ Do you stand by that opinion now that you are a successful fiction writer, and, if so, why have you chosen to write fiction?
A   I don’t see myself as a successful fiction writer. I’m still a beginner.
I wanted to see if I could do it. I had written some non-fiction stuff before and have a day job as a journalist (no, nothing even remotely glamorous or sensational), and saw fiction as a challenge, and I like a challenge. I’m still not sure if it’s a mug’s game. To be quite brutal about it, the odds against getting published to start with are steep, and the odds against staying published for a mid-list writer aren’t much better. On the other hand, dreaming up murder and intrigue is a great way to spend your days.


Q   You wrote about your first novel, ‘Frozen Out’ that ‘there was just too much material not to do it.’  Do you write for enjoyment, or do you somehow feel driven to do it?


A   If I didn’t get a buzz from writing, I wouldn’t do it, so the prime mover is definitely my own enjoyment. I think I’d been leading up to it for years, almost unconsciously collecting ideas, scenes and characters. Although I was already deep in Frozen Out at the time, it was the Crash in 2008 that crystallised everything as the lunacy of what had been going on just spilled out.
Writing fiction was also a release. I used to work for an editor with an incredibly rigid style. Everything in the magazine had to look the same and any kind of creative flair was firmly discouraged. So Frozen Out was partly born of that frustration of having to write that turgid, formulaic stuff. I later found out that one of my colleagues was doing the same thing; going home and writing fiction after spending all day writing for an editor who was firmly anchored in 1978.


Q   You have put some amazing photographs online that you took in Iceland. How difficult was it to leave such a beautiful place?


A     It was a wrench to leave, as I have some roots there that go deep. I met my wife there, two of our children were born in Iceland, but probably the right thing to do at the time.
Iceland isn’t an easy place to live in, especially as we didn’t live in comfortable urban Reykjavík. It’s at the edge of the world and although it is undeniably beautiful, somehow that passes you by when your car is buried past the roof in a snowdrift or when there are only a few short hours of daylight and the sun doesn’t actually rise at all.

Q       Q You have lived in at least two countries.  Does the displacement of settling in a new place add to your ability to feel detached as a writer?
A   The expression ‘Glöggt er gests augað’ means that the visitor has the sharper eye. I find it much easier to write about Iceland when I’m not there, as if the distance puts things better into perspective.
I read the papers online and listen to ‘Steam’ radio at home, so that keeps me in touch, and there’s rarely a day when I don’t speak to someone in Iceland (skype is a godsend). I have a far clearer idea of what’s going on in Icelandic politics than what’s going on in Westminster.
It’s also important to spend time there and there’s no substitute for speaking to people face-to-face. I don’t do a great deal of proper research, but I find it’s important to spend time there, with Steam radio on in the background, read the papers, chat to the fishermen at the quay, taxi drivers, the coppers and minor criminals I know, listen to what people are saying in the Co-op or the bank, take in the internecine local politics and the petty feuds going on, all that kind of stuff – and then write about it later.


Q   On your blog you claim that ‘developing a kevlar-lined rhino skin is an essential part of any writer’s kit.’  I think we all know what you mean, but can you explain why you said that?


A   It’s uncomfortable when someone who gave up after forty pages gives your book a laconic one star, or likes it but still gave it a solitary star because it was delayed in the post.
I get a good few complaints about the complex names and how difficult they are to cope with. The books are set in Iceland and people there aren’t called Jim and Sally. The names aren’t what we are used to and there’s no getting around that, regardless of my efforts to keep them as accessible when I could easily have made them so much more complex.
Anyhow, I decided to give a character in Chilled to the Bone a name so awkward that I defy any non-Icelander to pronounce it. But I did give him a suitably short nickname, so the real name only has to appear once or twice. I had expected my editor to ask for it to be changed, but she didn’t say anything, so it stayed in.


Q   How do you account for the gloomy atmosphere of Nordic Crime Fiction? Does it reflect the society? Do you think different countries have different generic characteristics and if so, why?


A   There are differences. Icelanders are different to the other Nordic people as it’s an island nation and there’s a real frontier mentality, which it shares to an extent with Norway. Maybe it’s because both have a past as colonies, while Sweden and Denmark were trading nations with aspirations of empire?
There are Nordic stereotypes that sometimes ring true. Danes have an irreverent sense of humour that the other Nordic nations don’t have in quite such abundance. I’d best not be too forthright about the national stereotypes – but they all make fun of each other.
It’s not just the crime fiction that’s gloomy. Literature does get taken very seriously and maybe that has spilled over into their crime fiction. In reality they are no more gloomy than we Brits are and in some ways they are less hung up and serious. They do know how to have a party when they put their minds to it. So, no. The image of gloom and misery that comes across in much Nordic fiction isn’t representative of the way they are.


Q   Is your writing governed by plot or character?


A   Character, definitely. I’ve tried plotting things in detail in advance, but it didn’t work for me. I get halfway through careful plans, and then an idea pops up that’s too good to not use, and suddenly the plan has been lost. So I work with a fairly loose set of waypoints and that seems to work better.


Q   You wrote that one of your villains ‘was a whole load of fun to write’.  It is certainly my experience that the bad guys are much more fun to write than the good guys. Is this a problem for you when writing a series with a protagonist on the right side of the moral compass?
A   It’s starting to become more of a problem now. I’m having to make more of a conscious effort to  write more Gunna, mostly by giving the poor lady a hard time. She gets the shock of her life in      Chilled to the Bone. I’m around halfway through the first draft of what should be the fourth             Gunna book, but so far she has hardly made an appearance, which is a little worrying.

Q   Good titles are so hard to think of. Your first novel was called Frozen Out in the UK and Frozen Assets in the US. Why did the title change?  Were you involved in the decision, and which of the titles do you prefer and why?
A   Originally the book was called Frozen Assets. Then one of the Icelandic banksters published a memoir with the same title, so I asked my publisher if they wanted to change it. They said not to worry about it. But at the last minute they decided to change it, and I was told when the decision had been made. By then, the US publisher was too far gone to make the same change. So the book appeared under two titles, which has caused some confusion. With the benefit of hindsight, they were entirely right. Frozen Out is a better title, although it bears no relevance to the subject matter.


Q   Frozen Out is set in a small community. How important was that social setting to you? Could you imagine setting a similar book in a large metropolis?


A   I wanted a setting that wasn’t all Reykjavík, as the countryside is very different in so many ways. I lived in a couple of smaller towns in Iceland, one with a population of around 700, so that’s the side of the country that I know best. The e-book that published in January (Winterlude) is set partly in the north of Iceland, not far from where I used to live, but I’m not sure I would have got away with that so easily in a full-length novel.


A   I hadn’t deliberately chosen to use a female protagonist, but Gunna just came to life and demanded attention, and seemed like another challenge. She was the sidekick in the original draft, but I twigged after a while that the original lead character was a hopeless collection of clichés. So I discarded him in favour of the far more interesting Gunna.

Chilled to the Bone
Published by Soho Crime 13 April 2013. 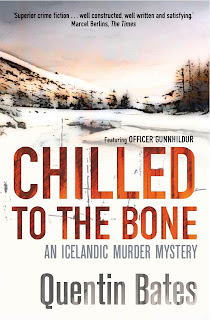