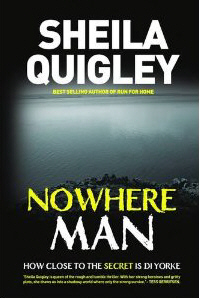 Nowhere Man picks up where Thorn in My Side ended. Aunt May is still in a coma. And although DI Mike York has managed to break up the drugs factory on Holy Island and the monastery returned to the monks, the perpetrators have to a large extent gone underground.  The threat to humanity from the families who have been in control for centuries is still very real.

Smiler, the young boy befriended by Mike York continues to experience premonitions of danger to Mike, but where is Mike? And where is Shelley Monroe?  The girl who had uncovered the horror that has been hidden for centuries, had managed to escape when the monastery was stormed, but in the resultant melee has still not conveyed her knowledge to Mike Yoke, and so is still being hunted.

How can Mike York a single policeman pit himself against the might, power and money of this worldwide organisation.  His only way of dealing with it, and to distance himself from those he loves in a hope of protecting them, is to go solo. Mike’s childhood friend Brother David and Smiler continue to keep a vigil at Aunt May’s bedside, as Mike ploughs his own furrow, which puts him in considerable danger.

This is the second in the series, set on Holy Island, and the story continues to twist and turn as Mike uncovers yet more secrets, and more horror.  This is a gripping entry in this enthralling series.  I cannot even envisage where this story will take us next, but I eagerly await the next book.  Highly recommended.
----
Reviewer: Lizzie Hayes

Sheila Quigley started work at 15 as a presser in Hepworths, a tailoring factory. She married at 18 and had three daughters: Dawn, Janine and Diane and a younger son, Michael. Recently divorced, she now has eight grandchildren, five boys and three girls, and every Saturday and Sunday can be found at a football match for the under tens and under fifteens. Sheila has lived on the Homelands Estate (at present with her son and two dogs) at Houghton-le-Spring near Sunderland for 30 years.
For more information on Sheila visit her website www.theseahills.co.uk