I discovered Michelle Spring's Laura Principal series in 1995 and Michelle became immediately became one of my favourite authors.  So I was thrilled when Michelle agreed to talk to me about her new book.

Michelle Spring grew up in British Columbia, and has lived in Cambridge, where many of her novels are set, for over thirty years. She has enjoyed two very different careers. She was first an academic, teaching at Anglia Polytechnic University where she was eventually appointed Professor of Sociology. During this time, she also lectured in the Social and Political Sciences Faculty at the University of Cambridge, did research, and published four volumes of non-fiction, including, with co-authors Anthony Bilton et al, the textbook Introductory Sociology. Michelle's fiction writing career was triggered by a confrontation with a violent stalker. Every Breath You Take, which drew on this experience, was short-listed for two major crime fiction awards. Four more novels featuring private investigator Laura Principal followed. In the Midnight Hour won the Arthur Ellis award (given by the Crime Writers of Canada) for Best Novel of the Year.
Q Michelle, your new book The ARVON Book of Crime and Thriller Writing which you have written with Laurie R King, is to be published September 6th. Could you tell us how this came about?
A I’d been aware for some time that there were a number of good primers for crime writing on the market, but none that are structured in such a way as to appeal both to aspiring writers of crime, and to the substantial readership who adore crime fiction and are eager to know more about how it is done. The format of the Arvon series fits the bill perfectly, and so when the commission was offered, I leapt at it. When Laurie R. King, author of the Sherlock Holmes/Mary Russell series of books, winner of just about every mystery award going, and all-round lovely person, agreed to join me, I knew we were on to a winner.

The book Laurie and I have written provides a detailed and practical guide to writing; we do our best to de-mystify the mystery (so to speak) by explaining (for example) how to turn a sketchy initial draft into a powerful second one, or how to create a gripping plot in which events and character development go hand in hand.  But the book also offers an in-depth discussion between Laurie and I about the nature and particular demands of crime fiction, its history and sub-genres, and about what it means to be a crime or thriller writer in the contemporary world. This section is very personal. Laurie and I were keen to gobeyond the obvious, and to offer our candid (and sometimes conflicting) reflections on the genre. This conflict, or rather difference, is key to the book. Laurie and I share many views about the process of writing, but we also have distinct positions on issues such as plotting: one of us plans carefully and meticulously before diving into the writing; the other plunges in without much forethought, and sorts out plot, consistency, character development and so on after the first draft has been fired into being. Airing these divergent approaches helps (we hope) to make it crystal clear that there is no one sure-fire formula for writing a crime novel or thriller. On the contrary, there are a number of approaches that can generate a good or even excellent book, and the job of the writer is to figure out what will work for her or him.

Q I understand that the book features fascinating insights from twenty-six top crime-writing guests.
A        Yes, indeed. Twenty-six terrific writers of crime novels and thrillers – from Sara Paretsky to Lee Child – agreed to share with us (and with you, the readers) their writing secrets. Many of their essays delve in depth into specific and tricky areas of writing: how to create (and sustain) suspense, how to write sizzling action scenes, how to incorporate vital background information without sending readers to sleep, and so forth. Others write with passion and conviction about the place of stories in the real world, and of the importance of writing your own type of truth. As a writer myself, I found these essays both instructive and inspiring.

Q          Did you and Laurie split the work and how long did the book take from conception to completion?
A          From planning to execution, the Arvon book took, perhaps, a year and a half. Tracking down and corresponding with guest authors was a lengthy, if rewarding, process. Laurie and I worked out a rough table of contents, based on what we’d like to see in a book of this kind, and what we thought would be useful to others. We didn’t split up the job of writing in any very clear-cut way; rather, we each drafted Sections or wrote about issues as they caught our imagination, and then gradually melded the resultstogether into a coherent whole. As a result, some sections are clearly Laurie’s work, and others mine, but here are just as many places where our voices are intertwined – and indistinguishable.  We found this to be the best way of drawing effectively on both of our experience as writers, while not submerging our differences.

Q           Did you and Laurie select the crime-writing guests? And if so what criteria did you use?
A           We did select the guests, and, believe me, this was no easy task. We wanted a range of writers that  would highlight the impressive diversity of crime fiction, including writers of high-octane thrillers and of psychological thrillers, historical crime novels and police procedurals, novels with a domestic focus and those that opened up a wider world of intrigue. We wanted a good mix of women and men, andwriters of traditional-style mysteries as well as those whose work takes a darker and grittier bent. Laurie lives in California and I in Cambridge, UK, so we were determined to include the best from both sides of the Atlantic.  Inevitably, given restrictions on space, there are many terrific writers who didn’t make the final cut. (Arvon no. 2, anyone?)

Q Although you are renowned for your many non-fiction books, you are known in the crime fiction world for your five-book series featuring Private Investigator Laura Principal. Where did Laura Principal come from?
A Laura Principal entered my life just after I’d been freed from the attentions of a stalker, who’d threatened my family and me for eighteen months.  Needing a distraction, I decided to have a go atfiction writing. It wasn’t an immediate success. I sat for weeks at the keyboard without writing a single interesting paragraph. And then – just when she was most needed – Laura Principal burst into life. She arrived on the page fully formed, a complete and engaging character  -  laidback, confident, with a wry sense of humour and clear views about the world – and it felt as if she, not I, wrote the initial draft of the first book in the series,  Every Breath You Take. (After that, I had to step in and actually do some work, which is when I began to learn the fiction writer’s craft.)

Q In 2006 you published a standalone suspense novel, The Night Lawyer.  Can you tell us a little about the decision at this time to move from your series? Particularly as ‘In the Midnight Hour’ won the Arthur Ellis award (given by the Crime Writers of Canada) for Best Novel of the Year.
A         I didn’t intend by any means to abandon the series. But I became interested in a story  about the criss- crossing lives of a woman and her stalker, both of whom were trapped by aspects of their past, and after a while it became clear that this story needed a fresh setting (the Isle of Dogs, as it happened) and fresh characters. Hence the standalone.

Q Is there a chance of any further Laura Principal books in the future? Or have you something else in mind?
A          I haven’t ruled out returning to Laura Principal at some time in the future, but for now I have a new and exciting project. I have begun research for my first historical novel, exploring the world of the bold pioneers who left the Ukraine in the 1890s and opened up the Canadian prairies. My grandmother was such a pioneer, and working on this book feels like a labour of love.

Q When embarking on a new book be it fiction or non-fiction what area of the book challenges you the most?
A I’m a planner by nature, and put enormous effort into research and into creating the perfect framework for a novel in advance. But I am always frustrated at not being able to leap straight into writing.  It’s the writing itself that I adore.

Q Do you have a favourite part of the writing process?
A That’s a hard one. As I say above, I adore writing; the crash and hum and tinkle of words is thrilling to me. But now that I think about it, I suppose for a sedentary person like me, there is a special pleasure in writing action scenes; when I imagine a fight, say, and put it into words, I feel afterwards the kind of high that friends tell me they get from a workout. (And it’s cheaper than joining a gym.)

Q As you know I am keen to promote new writers, so have you any golden tips for budding authors?
A          Read widely. Write every day, whether you feel inspired or not. Produce the very best
Books in the Laura Principal series are:
Every Breath You Take.      Running For Shelter
Standing in the Shadows.     Nights in White Satin
In the Midnight Hour 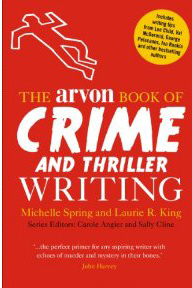 The official launch of Michelle's new book
'The Arvon Book of Crime and Thriller Writing
is at Heffers Bookshop, Trinity St. Cambridge on
Thursday 6th September at 6.30pm.
Do join us.