‘A Woman Unknown’ by Frances Brody 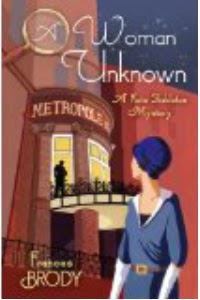 Kate Shackleton has accidentally become a private investigator. Receiving a telegram at the end of the Great War, informing her that her husband Gerald was ‘missing presumed dead’, Kate decided to try and discover exactly what happened to Gerald. In the course of her investigations she helped others by locating missing loved ones, and so has by reputation, become a private investigator.

Approached by Mr Cyril Fitzpatrick who is concerned about his wife Deirdre, and wants to know just where his wife goes when she is supposedly caring for her sick mother, Kate is wary of the job. She has come across Deirdre Fitzpatrick before.

Chief Inspector Marcus Charles of Scotland Yard asks Kate to meet him at the Hotel Metropole where a man known to Kate has been found by a chambermaid, dead in bed and not from natural causes. The man Everett Runcie is a banker facing ruin and disgrace by some devious dealing. His American heiress wife tired of his infidelities is now seeking a divorce.  But Everett Runcie had not been alone when he checked into the hotel, so where, and who, was his companion?

Cleverly plotted, could seemingly unrelated events be connected?  As Kate investigates she recalls what was put down to an accidental shooting at the start of the grouse season a few weeks back, and begins to wonder if there could be a tie up.  The more she delves, the more convoluted and sinister do matters appear. Can Kate untangle the complex threads and get to the truth?

The story is told by Kate in the first person, and by third person narratives from Kate’s assistant Sykes and Deirdre Fitzpatrick. Whilst Frances Brody has weaved an intriguing set of events for the reader to unravel, much of the pleasure in the book is in the period in which it is set, and which the author portrays brilliantly.  The story also highlights the difficulty of the divorce laws of the time.

A marvellous instalment, in this excellent series, this book is highly recommended.
------
Reviewer: Lizzie Hayes
Earlier books in the series are, Dying in the Wool, A Medal For Murder and Murder in the Afternoon. 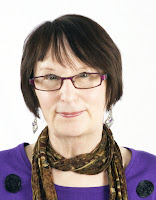 Frances Brody is a pseudonym of Frances McNeil who lives in Leeds where she was born and grew up. She worked in the USA as a secretary in Washington DC and New York. Frances studied at Ruskin College, Oxford and read English Literature and History at York University.Starting her writing life in radio, she has written scripts for television and theatre. Frances turned to crime for her first novel, Dying in the Wool, set on the outskirts of Bradford, Yorkshire in the 1920s.