‘Face of the Enemy’ by Joanne Dobson & Beverle Graves Myers 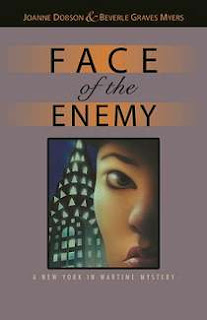 Published by Poisoned Pen Press,
4 Septmeber 2012.
ISBN: 978-1-4642-0031-3
The story opens in November 1941, when Japanese born Masako Oakley is dressing to attend the opening of her first solo art exhibition in  New York. Aware of the importance of this evening to his beloved wife, Professor Robert Oakley endeavours to hide from her his sickness. With the war raging in Europe, hatred and fear have spilled over to the USA, and the exhibition is picketed by an anti Japanese group. When Robert Oakley collapses, Louise Hunter is engaged to nurse him in his New York apartment.

One week later the Japanese attack the US fleet at Pearl Harbor, and rumours and fear grip the country.  Within 24 hours the lives of the Oakleys, take a dramatic turn when the FBI swoop on their apartment, arrest Masako and confiscate her paintings.  Lousie is outraged, and seeks to help the Oakleys.  She attempts to enlist the aid of Cabby Ward her boarding house roommate, but Cabby is trying to make it as a journalist and in her desire to succeed sees the situation of the Oakleys as the chance of a good story. And Louise as an excellent source that may help her career.

Meanwhile to further Masako’s troubles, the gallery owner Arthur Shelton who hosted Masako’s exhibition is found murdered, and FBI Agent Bagwell is intent on pinning the killing on Masako.  But NYPD Lieutenant McKenna is the investigating officer and doesn’t take kindly to interference by Louise, or Agent Bagwell.

The book brings home the terror of those who have lived in America the greater part of their lives, consider themselves American and have loyalty to their adopted country, but suddenly they are aliens, and live in fear of being rounded up and interned.  Two such people now living in terror are German born Helda Schroeder, and her son Howie.

As Agent Bagwell stacks up the evidence against Masako, and Robert Oakley’s health deteriorates, Louise struggles to find someone to take Masako’s case but few lawyers in the current climate want to stand up to defend a Jap!

As with all such stories, we meet with social racism, intrigue and good old-fashioned paranoia which breeds fear and brings out the worst in people.  But there are always those who are fair-minded and believe passionately in justice. So this is a story of the worst and the best of human nature.  A gripping story, which is highly recommended.
-----
Reviewer: Lizzie Hayes 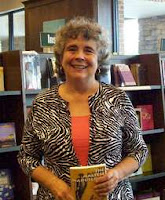 Joanne Dobson was an English professor, having taught for many years at Fordham University, also at Amherst College and at Tufts University. Unlike Karen, she was never faced with an on-campus homicide, nor was she ever called in as a consultant to the Bureau of Criminal Investigation. But she has occasionally asked herself, "what if . . . ?" 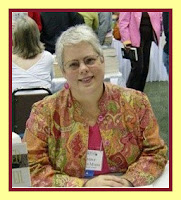 Beverle Graves Myers made a mid-life career switch from psychiatry to full-time writing. A graduate of the University of Louisville with a BA in History and an MD, she worked at a public mental health clinic before her first Tito Amato novel was published in 2004.  Bev also writes short stories set in a variety of times and places. Her stories have appeared in Alfred Hitchcock Mystery Magazine, Woman's World, and numerous anthologies. She has earned nominations for the Macavity Award, Kentucky Literary Award, and Derringer Award.  Bev and husband Lawrence live in Louisville and share their home with a rascal beagle-basset hound
Posted by Lizzie at 18:57