‘Lessons for Survivors’ by Charlie Cochrane 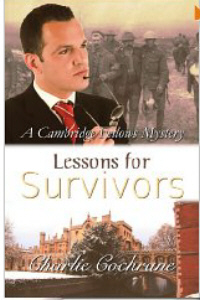 It is 1919 and Jonty Stewart and Orlando Coppersmith are survivors.  They have survived the Great War and the influenza pandemic that followed it, both of which have claimed the lives of many people they cared for.  The most remarkable thing of all is that their love has survived the ravages of war and, although they are scarred in mind and body, they are together again, ready to take up their disrupted lives.

Now they are back as fellows of St Bride's College, Cambridge, and living together in Forsythia Cottage.  The future looks hopeful; Orlando has been appointed as Professor of Applied Mathematics and he and Jonty have been offered an intriguing murder mystery to solve.  The pair have been approached by the Reverend Ian Bresnan who has asked them to discover whether his uncle, Peter Biggar, died from influenza or was murdered by his young wife, as Peter's twin brother, Simon, had claimed before he too died.  For Ian Bresnan this is a matter of urgency, because under the terms of Simon Biggar's will, if Ian cannot establish a case that proves Rosalind Biggar killed her husband, Peter, he will forfeit much of his uncle Simon's legacy, and he only has a month to find evidence of Rosalind's guilt.

The investigation is not the only call on Orlando's time; he still has to write and deliver his inaugural address and to chair an adjudication on a case of suspected plagiarism.

As Jonty and Orlando probe into the circumstances surrounding Peter's death, they discover that the Biggar family history has dark roots, involving the fate of Peter and Simon's mother nearly eighty years ago.

A far more personal danger takes the investigators' attention when Orlando is blackmailed to vote against his conscience in the plagiarism enquiry.  If Orlando does not find the accused plagiarist innocent, the blackmailer will tell the world the truth about Jonty and Orlando's relationship.  This would lead not only to disgrace and loss of their academic positions but also two years hard labour.  Once again, Jonty and Orlando have to fight for survival.

Lessons for Survivors is the latest in the Cambridge Fellows Mysteries.  I would like to read earlier books in the series and discover how Jonty and Orlando got to where they are now, especially with the interruption of an event as cataclysmic as the First World War.  However Lessons for Survivors works well as a stand-alone novel.

Jonty and Orlando are engaging character and their relationship is warm with a spice of mischief as they try to out-do each other in their pursuit of clues.  The book offers a convincing insight into the language, attitudes and social standards of the time and the mystery is pleasantly intriguing.  Lessons for Survivors is a very enjoyable read.
-----
Reviewed by Carol Westron

As Charlie Cochrane aka Ann Laird, couldn't be trusted to do any of her jobs of choice--like managing a rugby team--she writes. Her favourite genre is gay fiction, predominantly historical romances/mysteries, but she's making an increasing number of forays into the modern day. She's even been known to write about gay werewolves--albeit highly respectable ones.  She was named Author of the Year 2009 by the review site Speak Its Name but her family still regard her writing with a fond indulgence, just as she prefers.  Happily married, with a house full of daughters, Charlie tries to juggle writing with the rest of a busy life.  She loves reading, theatre, good food and watching sport. Her ideal day would be a morning walking along a beach, an afternoon spent watching rugby and a church service in the evening. 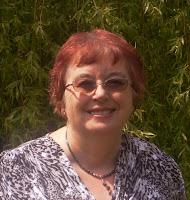 Carol Westron is a successful short story writer and a core contributor to Women's Weekly.  She also writes contemporary and historical crime and is currently looking for an agent or publisher.  An Adult Education teacher, Carol has always maintained that writing and reading fiction is good for people and has spent much of her