‘After Clare’ by Marjorie Eccles 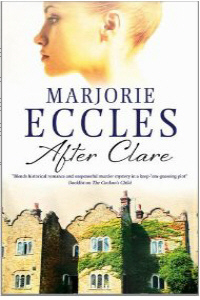 After nearly five decades Emily Fitzallan, nee Vavasour has returned to her childhood home Leysmorton Manor.  During her time abroad Leysmorton Manor had been used as a convalescence home during the war years and was now, in 1922, back in the hands of the family, whilst although the house belonged to Emily, it was her cousin Dirk who lived there.  But not everything had changed, for still the neighbouring house Steadings is inhabited by the Markhams, and it had brought back many memories seeing again her old friend Hugh Markham.  But the most poignant of memories is that of her elder sister Clare, who had gone for a walk one day and never returned.
The discovery of a soldier’s skeleton at the base of the old Yew tree propels the past into the present with shocking revelations. Could the death be connected to Clare’s disappearance.
As with previous novels by Marjorie Eccles much of the power of the book lies in the interaction between the characters. Although the book is set in 1922, the England to which Emily returns is much changed from the England she had left decades before. The war has wrought many social changes.  The younger members of Emily’s extended family Valentine and Poppy, contrast sharply with the older generation.  Emily is conscious that she has decisions to make.  Could she live in England again? And if she should decide to do so, how will it be to live with Dirk and his sister, as it is unthinkable to ask them to leave.  But as Emily ponders her dilemma, the investigation into the identity of the dead soldier begins to break down the fabric of life at Leysmorton Manor to reveal a second mystery.

Marjorie Eccles was born in Yorkshire and has spent some time on the Northumbrian coast. Marjorie has written mainly crime novels but also several romantic fiction, which have been published both in the UK and in the US. Many of her books have been translated and serialised around the world. She has one grown up son and now lives in Hertfordshire
Posted by Lizzie at 18:56