‘The Lost Library’ by AM Dean 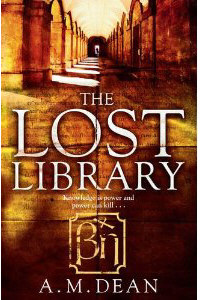 There is no doubt that the Da Vinci Code has spawned a whole genre of conspiracy thrillers. This one is by a Professor of Theology so his credentials for writing conspiracy thrillers seem pretty good! Adventures come thick and fast for our heroine here, Professor Emily Weiss, as she investigates a full-blooded conspiracy on several levels which reach far back into the past and embroil her in travelling round the world in pursuit of tenuous clues.

Emily is clever, of course, and resourceful in her thinking (also young and attractive!). She teaches at a university in the USA where a famous professor is murdered and has left her a mysterious message. Other dramatic events outside Emily’s ambit add to the thrills of the tale. The Lost Library of the title is that of ancient Alexandria and the adventures concern a fictional history developed into the modern world. I liked the touches of humour, as in this quotation “ [Emily] said the words she would never have expected her sceptical mouth to utter. ‘These two events have to be connected.’

The various settings are beautifully and cogently described as Emily travels to Oxford, Alexandria and Istanbul. The reading room of the modern library that has been built in Alexandria is lovingly portrayed.

Congratulations to Pan for producing a lengthy book in a standard paperback size with a decent size of print. Congratulations to the author for managing to keep destruction to a fairly low level - I recall one recent thriller which destroyed both a world famous theatre and a large university library in the first chapters in addition to losses of life!
-----
Reviewer: Jennifer Palmer
This is the first novel by A. M. Dean.

A M Dean is a leading authority on ancient cultures and the history of religious belief, whose expertise in late antiquity has earned him posts at some of the world’s most prestigious universities. An abiding interest in the human tendency toward conspiracies, together with a commanding grasp of the genuinely mysterious contexts of real history, inspire the breadth and focus of his creative works. His debut novel, The Lost Library, has just hit the shelves (released 16 August 2012) as a major-launch title with Pan Macmillan, available now in 12 territories and languages across the globe. His next novel, The Gnostic Key, comes out in 2013.