‘Burying the Past’ by Judith Cutler 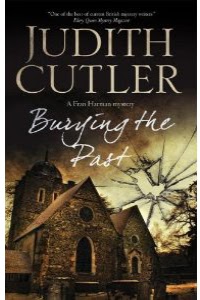 This fourth book in the series featuring Chief Superintendent Fran Harman finds her taking the plunge, and moving in with Assistant Chief Constable Mark Turner who has proposed marriage.  Fran has sold her place, and they have bought ‘The Rectory’. Unfortunately it has come complete with a skeleton buried in the vegetable patch.

There is much to be done at The Rectory and money for the renovations is tight, not helped by the fact that the sale of Mark’s house has been held up, as his daughter has taken possession, and nothing will move her.

Meanwhile, the suicide of a colleague and a series of metal thefts take up Fran’s time.  Then a young woman comes forward claiming to have been raped, and to have stabbed and killed the rapist. As if this wasn’t enough to contend with. Mark’s son turns up and it’s clear that he is less than ecstatic at the prospect of his father's forthcoming nuptials.

There is no doubt that dealing with murder must always be stressful, but when the murder is on ones doorstep, and compounded by family problems it becomes unbearable for Mark. Fran does her best but matters rapidly move beyond her control. However, despite all falling about her she continues to keep her focus, first directing her team on the metal thefts, and seeking the truth on the rape, but also delving into the past owner of the Rectory, which she hopes will shed light on the skeleton found in the garden.

Judith Cutler has, with this book, woven several interesting plot lines into a story, that deals equally with life in the police force, chasing thieves and killers, coupled with not only the personal problems in the lives of two main characters, who are senior police officers, but also their families, and additionally the problems and jealousies of the people who report to them in the police force.  Well crafted the reader is drawn into all their lives.  Compelling reading this is a real page turner, and is highly recommended.
-----
Reviewer: Lizzie Hayes
Earlier books in this series are Life Sentence, Cold Pursuit and Still Waters

Judith Cutler was born in the Black Country, just outside Birmingham, later moving to the Birmingham suburb of Harborne. Judith started writing while she was at the then Oldbury Grammar School, winning the Critical Quarterly Short Story prize with the second story she wrote. She subsequently read English at university. It was an attack of chickenpox caught from her son that kick-started her writing career. One way of dealing with the itch was to hold a pencil in one hand, a block of paper in the other - and so she wrote her first novel. This eventually appeared in a much revised version as Coming Alive, published by Severn House. Judith has five series. The first two featured amateur sleuth Sophie Rivers (10 books) and Detective Sergeant Kate Power (6 Books). Then came Josie Wells, a middle-aged woman with a quick tongue, and a love of good food, there are two books, The Food Detective and The Chinese Takeout. The Lina Townsend books are set in the world of antiques and there are five books in this series. There are two books featuring Tobias Campion set in the Regency period. Her most recent series features Chief Superintendent Fran Harman.  Judith has also written two standalone’s Scar Tissue and Staging Death.