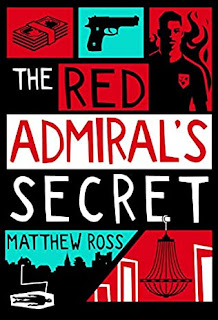 Builder Mark Poynter, whom we met in the first of this series, set in the Medway town of Gillingham (Death of a Painter, see Mystery People website/Reviews/R), is doing a great deal better than he had been in the first book. He’s managing the entire maintenance of Kidd Properties, property of the Kidd brothers, famous footballer Danny, who has earned a fortune playing for high-ranking Premier League Clubs, and older brother Stuart, a shrewd businessman. In particular Mark has just fitted out for Danny a beautiful Georgian manor house with every conceivable luxury. And now Danny has a new scheme: having decided to move on from football, he fancies himself as a property developer starting with the redevelopment into flats of an abandoned pub called The Admiral Guthrie. Someone else had already put in an offer but Danny, without consulting Stuart, has clinched the sale with a higher offer. Mark has no intention of becoming involved in any spats between the two brothers; for him getting paid is the main thing and so far with Kidd Properties there’s never been any problem. A somewhat sinister Scotsman has made it plain to Mark that the original would-be buyer is still interested but Danny, with a typical display of youthful arrogance, rejects any ideas of an offer from whoever the Scotsman is acting for. Mark makes some enquiries, but no-one is saying anything.

The only thing not going very well for Mark is his relationship with Perry (Parminder), the beautiful nurse who lives next door. He’s still crazy about her but what is upsetting her is that the local Mr Big, known only as Hamlet, has been trying to get in touch with him and she wants to know why. Hamlet is a dangerous character, at one moment charismatic and charming, the next violent and unpredictable. He’s interested in another development which he wants Mark to do for him: refitting a shop in one of Medway’s most run-down streets – probably something dodgy but Mark looks on it as an extra string in case something goes awry with his relationship with the Kidd brothers. You never know . . .

And something does go wrong. First of all, there’s a fire at the Kidd’s manor house and Danny’s car is destroyed. And then Mark finds it difficult to get estimates for some of the work that needs to be done at the Red Admiral. And then Danny’s found dead so the whole Red Admiral project has to be put on hold until Stuart thinks of a way to get on with it and demolition of the building can start. And that is when the Admiral Guthrie’s secrets, dating back to Medway’s crime-ridden past in the 40s and 50s begin to be revealed.

Like the writer’s earlier story, The Red Admiral’s Secret, is both comic and dramatic as we follow Mark’s efforts while he endeavours to extract himself from his misfortunes and to make things up with Perry, both helped and hindered by his mates, Uncle Bern, good workman but forever on the scrounge, Disco, fantastic carpenter until the pubs open, and a new addition, part-time fire officer Fiery Jac, keen to turn her hand to anything. Recommended.
------
Reviewer: Radmila May

Matthew Ross was born and raised in the Medway Towns, England. He was immersed in the building industry from a very early age helping out on his father’s sites during school holidays before launching into his own career at 17. He’s worked on projects ranging from the smallest domestic repair to £billion infrastructures, and probably everything in between.  A lifelong comedy nerd, he ticked off a bucket-list ambition and tried his hand at stand-up comedy. Whilst being an experience probably best forgotten (for both him and audiences alike) it ignited a love for writing, leading to various commissions including for material broadcast on BBC Radio 4 comedy shows.  Matthew moved into the longer format of novel writing after graduating from the Faber Academy in London in 2017. Death Of A Painter was his first novel in a planned series of stories featuring Mark Poynter and his associates. Matthew enjoys reading all manner of books - especially crime and mystery; 80s music; and travelling and can’t wait for the next trip to New Zealand to spend time with family and friends. He still lives in Kent with his Kiwi wife, his children and a very old cat.

Radmila May was born in the U.S. but has lived in the U.K. since she was seven apart from seven years in The Hague. She read law at university but did not go into practice. Instead she worked for many years for a firm of law publishers and still does occasional work for them including taking part in a substantial revision and updating of her late husband’s legal practitioners’ work on Criminal Evidence published late 2015. She has also contributed short stories with a distinctly criminal flavour to two of the Oxford Stories anthologies published by Oxpens Press – a third story is to be published shortly in another Oxford Stories anthology – and is now concentrating on her own writing.
Posted by Lizzie at 11:52