‘I Am Pain’ by Ethan Cross 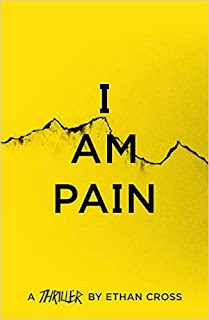 This is the third instalment in the Francis Ackerman Thriller series.  In the first two we saw ex-police officer Marcus Williams determined to bring the serial killer Ackerman to justice.  After Marcus left the police force, he was recruited to the Shepherd Organisation whose raison d'être is to find the very worst of Ackerman’s ilk and either apprehend or terminate them.  In their previous encounters, Ackerman has always successfully eluded Marcus, but the situation has become more complicated since the two men discovered that they are brothers.  Marcus is appalled to learn about the connection and fears that he too may harbour the murderous streak that courses through his bad brother’s veins.  Ackerman, on the other hand, displays a certain amount of wry amusement but he is also somewhat chastened and is trying hard to curb his violent tendencies.

Meanwhile a new killer has emerged in and around Kansas City.  The press call this latest predator the Coercion Killer because the modus operandi involves abducting a person’s family to coerce them into killing a named target.  If the victim does as they are told then their family is allowed to live but if the victim resists then their nearest and dearest being brutally murdered and delivered to the failed assassin.  But that’s not all.  The Coercion Killer works with such selfless and callous efficiency that the Shepherd Organisation believe “it” has been psychologically programmed by a “master.”

Marcus and his team are put to work on the case, but he needs help from his brother because he realises that the master is none other than their father!  It was, after all, Ackerman Senior’s whacky desire to “create” a serial killer that resulted in his son Francis’s evil proclivities.  Now the old man wants to go one better by generating a whole army of killers using the cipher he has groomed to do the dirty work whilst he controls events from a distance.  As the death toll rises it is decided that the best way to stop the father is to use the psychopathic mindset of his wanted son.  Marcus is conflicted by the strategy and he worries about the morality of the plan.  He finds himself sucked into the vortex created by his deranged parent and his life hangs by a thread.  In his captivity he witnesses extremes of depravity that lure him to the very brink of insanity.

I Am Pain works well as a stand-alone and, like the two books that preceded it, the novel depicts extreme violence and horrific psychological abuse.  The tight plot unfolds at rip-roaring speed, hurtling the reader through a maze of murders and mayhem and simultaneously questioning the morality of using Francis to bring his own father to justice.  The novel also explores the relationship between good and evil as something more fluid than fixed, particularly when seen through the perspective of the two brothers at the heart of the action.

I Am Pain is intriguing and thrilling and I recommend it to all readers who like their crime served with a lavish dressing of horror.
------
Reviewer: Dot Marshall-Gent

Dot Marshall-Gent worked in the emergency services for twenty years first as a police officer, then as a paramedic and finally as a fire control officer before graduating from King’s College, London as a teacher of English in her mid-forties.  She completed a M.A. in Special and Inclusive Education at the Institute of Education, London and now teaches part-time and writes mainly about educational issues.  Dot sings jazz and country music and plays guitar, banjo and piano as well as being addicted to reading mystery and crime fiction.
Posted by Lizzie at 16:24