The Woman in The Wood by M.K. Hill 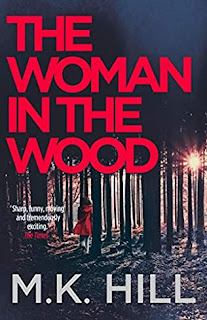 Three years ago Danny Cruikshank, known as Abs, was a celebrity appearing on a reality show set in Essex and had everything going for him. However, one drunken night while spending a few days with three friends in Wales everything changed. Nothing would ever be the same again.

Every now and again he has flash backs, bringing on panic attacks. The trouble is he can't remember exactly what happened, only that the four of them buried a young woman, but how she died is a mental block. They have all kept the whole thing a secret since and she was never discovered.

Did Abs kill her or was it one of his mates? Was it someone else altogether or was it even an accident?  After them all being questioned when the young woman was declared missing, they were released without charge. However, Abs was dropped from the show and suddenly he found any T.V work impossible to get. He was presently running out of money.

Now after the three years, Deano one of the four involved is murdered. Can someone be out for revenge? Are the other three also in danger?

Detective Inspector Sasha Dawson and her Sergeant Ajay de Faz are given the task of solving Deano's murder. On learning of the events of three years ago they realise time is of the essence. It's important they find the killer in case the other three friends are in danger.

The young woman who went missing in Wales, Rhiannon, was staying with her aunt and uncle when she disappeared. The uncle, Davey Jenkins has sworn he will get to the truth and comes under suspicion for the killing of Deano, but can Sasha and de Faz prove that he is guilty? Can they prevent another murder?

The police are also trying to solve the disappearance recently of a number of local girls and pressure is put on Inspector Dawson and her team to get results.

A really great heart thumping thriller, full of surprises and excitement. The author shows a great insight into human behaviour.

This is the second book I have read about Sasha and her team and look forward with anticipation to the next. I cannot recommend The Woman in The Wood enough, it's outstanding.
------
Reviewer: Tricia Chappell

M K Hill is a pseudonym used by Mark Hill who has been a journalist and an award-winning music radio producer. He worked for about five minutes in PR. He now writes the Drake and Crowley thriller series. Mark says he loves writing. It's his dream job.  The Bad Place is the first book in the Sasha Dawson series written under the name M K Hill.  The Woman in the Wood, is the second book in the.

Tricia Chappell.  I have a great love of books and reading, especially crime and thrillers. I play the occasional game of golf (when I am not reading). My great love is cruising especially to far flung places, when there are long days at sea for plenty more reading! I am really enjoying reviewing books and have found lots of great new authors.