‘The Prophet’ by Martine Bailey 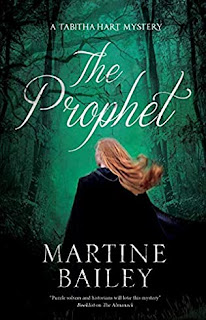 Published by Severn House,
26 February 2021.
ISBN: 978-0-7278-9103-7 (HB) It is 12 May 1753, which before the adoption of the Gregorian Calendar in England in 1752 (some centuries after the adoption of the Calendar in much of Europe) when 11 days were subtracted from the previous Julian calendar, had been May Day. Tabitha de Vallory who is expecting her first child is riding through the forest with her husband Nat, accompanied by her childhood friend Jennet and a groom, Tom, to visit the ancient Mondrem Oak. Between Old May Day and Midsummer, some people believe that the curtain between this world and the world of the uncanny is torn apart; Tabitha wants to visit the ancient tree to leave an offering for the safe birth of her child; but what she does not expect to find under the tree is the body of a young woman, moreover she seems familiar from Tabitha’s previously disreputable life before she met and married Nat. And it seems also that she suffered a violent death for her body has been mutilated. Jennet’s father, who is the village constable, must be sent for and then Dr Caldwell, the coroner and also Tabitha’s physician, must be sent for to certify the cause of death.

But Tabitha and her companions are not the only people in the forest. The two young girls who had first found the body, thinking it a sleeping May Queen, are part of a larger group led by a charismatic preacher, Baptist Gunn. He reassures Tabitha and Nat that he and his group are not poachers but are simply stopping temporarily before setting off to a new life in America. Gunn makes prophesies and sees visions and he and his followers believe a great and holy destiny awaits them in the New World. But how genuine is he? Also prowling in the forest are gangs of poachers with blackened faces, who hunt the game to which they believe they are entitled. But a recent series of Acts of Parliament (known as the Black Acts) has not only made such activities criminal offences but imposed the death penalty for all but the most minor offences. Nat with his radical opinions sympathises with the poachers many having been driven to this by the growing practice of enclosures by which people are driven off land which they have been farming for generations to the profit of the landowners. Indeed, Nat himself, who now is heir to a small estate, is being threatened by a larger landowner, Lord Langley, who is laying claim to part of Nat’s land. All this makes for a really toxic brew but what Tabitha is focused on is finding out who the dead girl was, how she came by her death and what was the cause of her death. Tabitha’s advanced state of pregnancy does not deter her, and she is glad to have the services of an experienced nurse, Sukey Adams. But the outcome of Tabitha’s search for the truth is not at all what she was expecting.

The eighteenth century is often described as the Age of Enlightenment when new techniques of rational enquiry sought answers through the appliance of science and logic. But there were other aspects to the period. Many people still clung to old, superstitious beliefs; indeed, Tabitha does so herself when it comes to her pregnancy relying for advice not just on her doctor (although by today’s standards much of his advice is pretty weird) but on ancient charms and tokens. And the growing prosperity of England was founded not only on the abominable slave trade but also on the ever-increasing expropriation and exploitation of what were thought of as the lower levels of society. And there were those who believed, as Baptist Gunn proclaims, that an alternative model of society was possible, the best-known of these being John Wesley. This is an interesting and informative read especially for those with an interest in history.
------
Reviewer: Radmila May 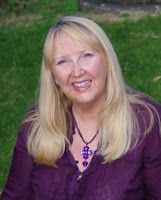 Martine Bailey entered cookery contest with no idea it would lead to a life-changing obsession with French cuisine. As an amateur cook, Martine won the Merchant Gourmet Recipe Challenge and was a former UK Dessert Champion, cooking at Le Meurice in Paris. Inspired by eighteenth-century household books of recipes, An Appetite for Violets invites readers to feast on the past as a sharp-witted young cook is taken on a mysterious trip to Italy. In pursuit of authenticity Martine studied with food historian Ivan Day and experienced Georgian food and fashion at firsthand with an historic re-enactment society. Martine lives in Cheshire, England and Auckland, New Zealand. She is married with one son.  The Almanack is her latest book. Published in January 2019